What is Euphoria Overview?

Euphoria stands for End-User Programming with Hierarchical Objects for Robust Interpreted Applications. Euphoria's first incarnation was developed by Robert Craig on an Atari Mega-ST and it was first released in the year 1993. It is now being maintained by Rapid Deployment Software.

Euphoria is being used for the developing of Windows GUI programs, high-speed DOS games, and Linux/FreeBSD X Windows programs. It can also be used for CGI (Web based) programming.

Here is the list of major features of Euphoria-

Euphoria is available on Windows, Linux, FreeBSD, and OSX. Here is the bare minimum version required with the following platforms :

Here are some of the prominent limitations of Euphoria -

But now a days , the language is getting popular very fast and you can hope to have nice utilities and books available for the language very soon.

This product is completely free and open source, and has thus benefited from the contributions of many people. You have complete royalty-free rights to distribute any Euphoria programs that you can develop.

Icon files, such as euphoria.ico and binaries available in euphoria\bin, can be distributed with or without your changes.

You can shroud or bind the program and distribute the resulting files royalty-free. Some additional 3rd party legal restrictions might apply only when you use the Euphoria- To-C translator.

The generous Open Source License allows Euphoria to be used for both personal and commercial purposes. Unlike other open source licenses, your changes need not have to be made open source. 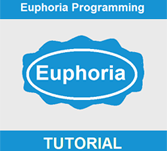