What is ETL categorization?

ETL Testing categorization is performedbasis on aims of testing and reporting. Testing categories may differaccording to the organization standards and it also based on the client requirements. Usually, ETL testing is categorized depending on the below points −

Retesting − It includes bugs fixing and defects in data in the target system and running the reports once again for validation of data.

System Integration Testing − It includes testing of all the individual systems, and subsequentlyintegrate the results to ensurethat there are no deviations. There are three approaches that can be employedfor performing this: top-down, bottom-up, and hybrid.

In this sort of testing, there is a new DW system built and verified. Data inputs are captured from end-users and also from various data sources and a new data warehouse is generated. Later, the data verification is performed in the new system using ETL tools.

In migration testing, end users have an existing Data Warehouse and ETL, but the willgo for a new ETL tool for upgrading the productivity. It includes data migration from the current system with a new ETL tool.

In change testing, new data is appended from various data sources to thecurrent system. end users can also alter the current rules for ETL or a new rule can also be appended.

Report testing includes generating reports for validation of data. Reports are the ultimateresult of any DW system. Reports are tested on the basis of their layout, data in the report, and calculated values. 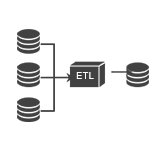