What is the Link to SQL Translation in DocumentDB SQL?

In DocumentDB , SQL is used to query the documents. In .NET development ,there is LINQ provider which can generate appropriate SQL from LINQ query.

In DocumentDB, the LINQ provider included with the DocumentDB .NET SDK supports all the JSON primitive types which are as follows :

The scalar expressions supported in the LINQ provider included with the DocumentDB .NET SDK are as follows:

The list of LINQ operators supported in the LINQ provider included with the DocumentDB .NET SDK are:

The usage the .Net SDK is illustrated in the following example. Following are the three documents which we will be consider for this example.

The query using LINQ is explained in the following code. We've defined a LINQ query in q, but it won't execute until we run to list.

For DocumentDB ,the SDK will convert our LINQ query into SQL syntax, generating a SELECT and WHERE clause based on our LINQ syntax.
The above queries are called from the CreateDocumentClient task.

the above code is executed and the following output is produced. 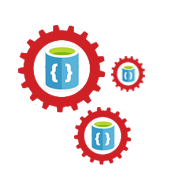