Parallel execution dramatically reduces response time for data-intensive operations on large databases typically associated with decision support systems (DSS)and data warehouses.You can also implementparallel execution on certain types of online transaction processing (OLTP) and hybrid systems. Parallel execution is sometimes called parallelism. Simply expressed, parallelism is the idea of breaking down a task so that, instead of one process doing all of the work in a query, many processes do part of the work at the same time. An example of this is when four processes handle four different quarters in a year instead of one process handling all four quarters by itself. The improvement in performance can be quite high. In this case, each quarter will be apartition,a smaller and more manageable unit of an index or table.

When to implement Parallel Execution
The most common use of parallel execution is in DSS and data warehousing environments.Complex queries, such as those involving joins of several tables or searches of very large tables,are often best executed in parallel.

Parallel execution benefits systems that have all of the following characteristics: 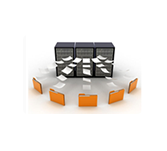