Sometimes in a value chain involving several business processes monitoring the flow of products through a system, or multiple measures of inventory at different points, a conflict arises in presenting the amounts. Everyone may agree that the numbers are correct but different parties along the chain may wish to see the numbers expressed in different units of measure. For instance, manufacturing managers may wish to see the entire product flow in terms of car loads or pallets. Store managers, on the other hand, may wish to see amounts in shipping cases, retail cases, scan units (sales packs), or consumer units (individual sticks of gum). Similarly, the same quantity of a product may have several possible economic valuations. We may wish to express the valuation in inventory-valuation terms, in list-price terms, in original-selling-price terms, or in final-selling-price terms. Finally, this situation may be exacerbated by having many fundamental quantity facts in each fact record.

Consider a situation where we have ten fundamental quantity facts, five unit-of-measure interpretations, and four valuation schemes. It would be a mistake to present just the 13 quantity facts in the fact table and then leave it up to the user or application developer to seek the correct conversion factors in remote dimension tables, especially if the user queries the product table at a separate time from the fact table without forcing the join to occur. It would be equally bad to try to present all the combinations of facts expressed in the different units of measure in the main fact table. This would require ten times five quantity facts, plus ten times four valuation facts or 90 facts in each fact table record! The correct compromise is to build an underlying physical record with ten quantity facts, four unit-of-measure conversion factors, and four valuation factors. We need only four unit-of conversion factors rather than five, since the base facts are already expressed in one of the units of measure, preferably either the smallest unit of measure or the largest so that all the calculations to derive the other units of measure are consistently either multiplications or divisions. Our physical design now has ten plus four plus four, or 18 facts, as shown in Figure below. 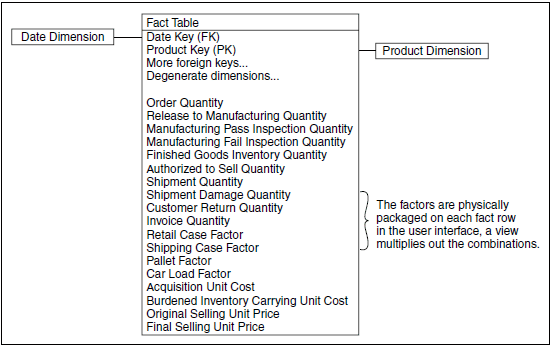 The packaging of these factors in the fact table reduces the pressure on the product dimension table to issue new product records to reflect minor changes in these factors, especially the cost and price factors. These items, especially if they routinely evolve, are much more like facts than dimension attributes.