If you don’t pay attention to referential integrity, it is amazingly easy to violate it. The authors have studied fact tables where referential integrity was not explicitly enforced; in every case, serious violations were found. A fact record that violates referential integrity (because it has one or more bad foreign keys) is not just an annoyance; it is dangerous. Presumably, the record has some legitimacy, as it probably represents a true measurement event, but it is stored in the database incorrectly. Any query that references the bad dimension in the fact record will fail to include the fact record; by definition, the join between the dimension and this fact record cannot take place. But any query that omits mention of the bad dimension may well include the record in a dynamic aggregation!

In Figure below, we show the three main places in the ETL pipeline where referential integrity can be enforced. They are: 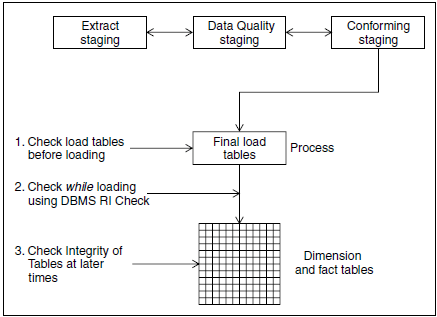 The second option of having the database enforce referential integrity continuously is elegant but often too slow for major bulk loads of thousands or millions of records. But this is only a matter of software technology. The Red Brick database system (now sold by IBM) was purpose-built to maintain referential integrity at all times, and it is capable of loading 100 million records an hour into a fact table where it is checking referential integrity on all the dimensions simultaneously!

In an environment with a million-row product dimension and a billion row fact table, this is a ridiculous query. But perhaps the query can be restricted only to the data that has been loaded today. That assumes the time dimension foreign key is correct! But this is a sensible approach that probably should be used as a sanity check even if the first approach is the main processing technique.