One of the most important advantages of dimensional modeling is that a number of significant changes can be made to the final delivered schemas without affecting end user queries or applications. We call these gracefulmodifications. This is a powerful claim that distinguishes the dimensional modeling world from the normalized modeling world, where these changes are often not graceful and can cause applications to stop working because the physical schema changes.

There are four types of graceful modifications to dimensional schemas: 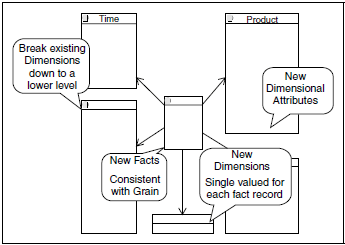 The four types of graceful modification

Thefirst three types raise the issue ofhowto populate the old history of the tables prior to the addition of the fact, dimension, or attribute. Obviously it would be nice if old historical values were available. But more often, the fact, dimension, or attribute is added to the schema because it has just become available today. When the change is valid only from today forward, we handle the first three modifications as follows:

The fourth type of graceful modification, increasing the granularity of a dimensional schema, is more complicated. Imagine that we are tracking individual retail sales, as depicted in Figure. Suppose that we had chosen to represent the location of the sale with a store dimension rather than with the cash register dimension. In both cases, the number of fact table records is exactly the same, since the grain of the fact table is the individual retail sale (line item on a shopper ticket). The only difference between a cash register view of the retail sales and a store view of the retail sales given the same fundamental grain is the choice of the location dimension. But since cash registers roll up to stores in a perfect many-to-1 relationship, the store attributes are available for both choices of the dimension. If this dimension is called location, with some care, no changes to the SQL of existing applications are needed if the design switches from a store-location perspective to a cash-register-location perspective.

It is even possible to increase the granularity of a fact table without changing existing applications. For example, weekly data could change into daily data. The date dimension would change from week to day, and all applications that constrained or grouped on a particular week would continue to function.