Dimension tables are denormalized flat tables. All hierarchies and normalized structures that may be present in earlier staging tables should be flattened in the final step of preparing the dimension table, if this hasn’t happened already. All attributes in a dimension must take on a single value in the presence of the dimension’s primary key. Most of the attributes will be of medium and low cardinality. For instance, the gender field in an employee dimension will have a cardinality of three (male, female, and not reported), and the state field in a U.S. address will have a cardinality of 51 (50 states plus Washington, DC). If earlier staging tables are in third normal form, these flattened second normal form dimension tables are easily produced with a simple query against the third normal form source. If all the proper data relationships have been enforced in the data-cleaning step, these relationships are preserved perfectly in the flattened dimension table. This point is consistently misunderstood by proponents of delivering data to end users via a normalized model. In the dimensional-modeling world, the data-cleaning step is separated from the data-delivery step, in such a way that all proper data relationships are delivered to the end user, without the user needing to navigate the complex normalized structures.

It is normal for a complex dimension like store or product to have multiple simultaneous, embedded hierarchical structures. For example, the store dimension could have a normal geographic hierarchy of location, city, county, and state and also have a merchandising-area hierarchy of location, district, and region. These two hierarchies should coexist in the same store dimension. All that is required is that every attribute be single valued in the presence of the dimension table’s primary key.

If a dimension is normalized, the hierarchies create a characteristic structure known as a snowflake, if indeed the levels of the hierarchies obey perfect many-to-1 relationships. See Figure below. It is important to understand that there is no difference in the information content between the two versions of dimensions in this figure. The difference we do care about is the negative impact the normalized, snowflaked model has on the end user environment. There are two problems. First, if the strict many-to-1 relationships in a hierarchical model change, the normalized table schema and the declared joins between the tables must change, and the end user environment must be recoded at some level for applications to continue working. Flat versions of the dimension do not have this problem. Second, complex schemas are notorious for confusing end users, and a normalized schema requires masking this complexity in the presentation area of the data warehouse. Generally, flat dimension tables can appear directly in user interfaces with less confusion. 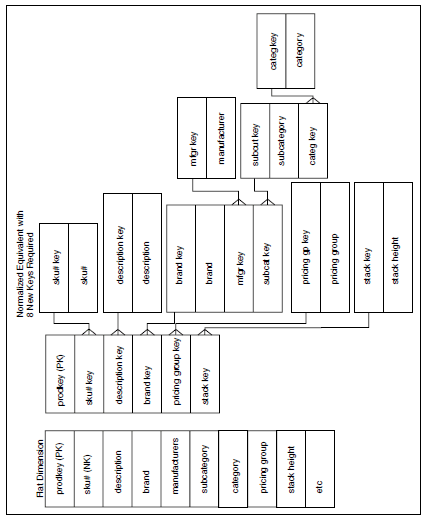 Flat and snowflaked versions of a dimension

Having railed against snowflaked dimensions, there are nevertheless some situations where a kind of snow flaking is recommended. These are best described as subdimensions of another dimension. Please refer to the section with this name later in this section.

Each time a new dimension record is created, a fresh surrogate key must be assigned. See Figure below. This meaningless integer is the primary key of the dimension. In a centralized data warehouse environment, the surrogate keys for all dimensions could be generated from a single source. In that case, a master metadata element contains the highest key used or all the dimensions simultaneously. However, even in a highly centralized data warehouse, if there are enough simultaneous ETL jobs running, there could be contention for reading and writing this single metadata element. And of course, in a distributed environment, this approach doesn’t make much sense. For these reasons, we recommend that a surrogate key counter be established for each dimension table separately. It doesn’t matter whether two different surrogate keys have the same numeric value; the data warehouse will never confuse the separate dimensional domains, and no application ever analyzes the value of a surrogate key, since by definition it is meaningless. 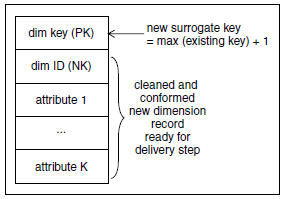 Assigning the surrogate key in the dimensionalizing step