The data warehouse architect will frequently specify a dimension to be attached multiple times to the same fact table. These are called dimensionalroles. Probably the most common role-playing dimension is the calendar date dimension. Many fact tables, especially the accumulating snapshot fact tables, have multiple date foreign keys. We discuss accumulating snapshot fact tables later. See Figure below. Another common example of a roleplaying dimension is the employee dimension, where different foreign keys in the fact table represent different types of employees being involved in a single transaction. See Figure below. 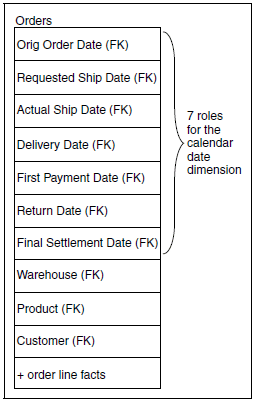 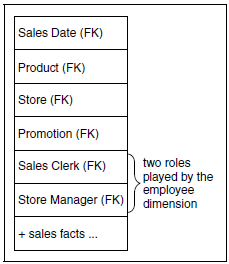 In all role-playing dimension implementations, were commend first building a generic single dimension table and then implementing each of the roles with a view on this generic table. See Figure below. For instance, if we have an order-date, a shipment-date, a payment-date, and a return-date on an orders transaction accumulating snapshot fact table, we would first build a generic calendar date dimension and the create four views corresponding to the four dates needed. If the fields in each view are identically named, the application developer and possibly the end user will need to see the fully qualified names to distinguish similar fields from the different views in the same query. For that reason, we recommend creating distinguishable field names in the original view definitions so that every tool, even those not supported by metadata, will display the fields unambiguously.