What is a Queue - Data Structures

A queue (pronounced /kjuː/) is a particular kind of collection in which the entities in the collection are kept in order and the principal (or only) operations on the collection are the addition of entities to the rear terminal position and removal of entities from the front terminal position. This makes the queue a First-In-First-Out (FIFO) data structure. In a FIFO data structure, the first element added to the queue will be the first one to be removed. This is equivalent to the requirement that whenever an element is added, all elements that were added before have to be removed before the new element can be invoked. A queue is an example of a linear data structure.

Representation of a FIFO Queue 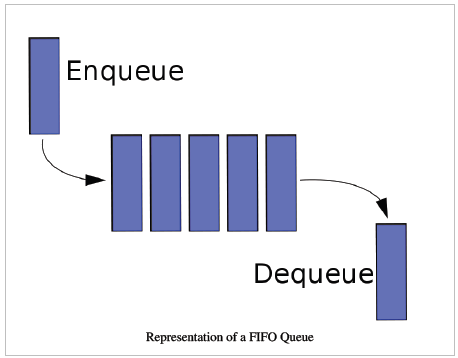 Queues provide services in computer science, transport and operations research where various entities such as data, objects, persons, or events are stored and held to be processed later. In these contexts, the queue performs the function of a buffer. Queues are common in computer programs, where they are implemented as data structures coupled with access routines, as an abstract data structure or in object-oriented languages as classes. Common implementations are circular buffers and linked lists.

Common operations from the C++ Standard Template Library include the following:

Returns True if the queue is empty, and False otherwise.

Returns a reference to the value at the front of a non-empty queue. There is also a constant version of this function, const T& front().

Removes the item at the front of a non-empty queue.

Inserts the argument foo at the back of the queue.

Returns the total number of elements in the queue.

Based on an example in R.S Algorithms.

The defining attribute of a queue data structure is the fact that allows access to only the front and back of the structure. Furthermore, elements can only be removed from the front and can only be added to the back. In this way, an appropriate metaphor often used to represent queues is the idea of a checkout line (Ford/Topp p. 385).

Other examples of queues are people traveling up an escalator, machine parts on an assembly line, or cars in line at a petrol station. The recurring theme is clear: queues are essentially the same as a queue you would get in a shop waiting to pay. In each of the cases, the customer or object at the front of the line was the first one to enter, while at the end of the line is the last to have entered. Every time a customer finishes paying for their items (or a person steps off the escalator, or the machine part is removed from the assembly line, etc.) that object leaves the queue from the front.

Theoretically, one characteristic of a queue is that it does not have a specific capacity. Regardless of how many elements are already contained, a new element can always be added. It can also be empty, at which point removing an element will be impossible until a new element has been added again. A practical implementation of a queue, e.g. with pointers, of course does have some capacity limit, that depends on the concrete situation it is used in.

For a data structure the executing computer will eventually run out of memory, thus limiting the queue size. Queue overflow results from trying to add an element onto a full queue and queue underflow happens when trying to remove an element from an empty queue. A bounded queue is a queue limited to a fixed number of items.