By year end 2009,it’s estimated that the total number of people who will have listened to a podcast in the U.S. alone will be 21.9 million. This is projected to grow to 37.4 million by 2013,according toMarketer’s senior analyst Paul Verna in his 2009 “Podcasting:Into the Mainstream” report. Yet,I’m not going to spend a lot of time on them in this book.

The reason is easy enough to fathom. They have a more limited though important benefit when it comes to engaging customers,but podcasting still remains somewhat alien to most of those people you are going to call your customers to begin with. I made a command decision to not incorporate a lot about podcasting in part due to a couple of salient pieces of information. Of those who are listening to podcasts,according to the Edison Group’s 2008 Survey on Podcasting (1,857 respondents),71 percent of those who listen still listen on their PC,which makes podcasts a sophisticated archived piece of recorded Internet radio. But even more telling,63 percent of the respondents in both 2007 and 2008 never even heard of podcasts even with the growth rates mentioned above.

The true value of a podcast is what our good buddy Beth Comstock of NBC Interactive called “timeshifting” and “placeshifting”—the ability to take the podcast from somewhere and put it on something else (placeshifting) and then listen to it when you want (timeshifting).

For those of you who are confused as to what a podcast is and are thinking it’s what doctors put on the broken spores of the aliens from Invasion of the Body Snatchers,it’s an audio file that is enclosed by a piece of XML code called an RSS feed. RSS stands for Really Simple Syndication. If you’re technically conversant,it is really simple—it just isn’t for those who aren’t. So what facilities like iTunes (in particular) have done is make podcasts available via subscription,so that each time there is a new episode of your podcast,upon synchronization with either a podcast aggregator or with a site like iTunes directly,the podcast episode is updated. Then you can listen to it (or watch it if it’s a video podcast) on your PC or set it to download to your MP3 player (I’d say iPod,but some of you anti-Apple people might be offended).

The Business Benefits:Podcasting,Mindshare,Branding
There is some direct revenue-producing benefit in podcasting. For example,the topical humor website The Onion derives revenue from major company ads,because it has a wide listenership and an even bigger audience for its videocasts. Several “amateurs turned pro” like Cali Lewis on GeekBrief.TV get sponsorships and advertising because of audiences in the hundreds of thousands. But for the enterprise,this model is actually almost stupid unless you are a small business producing podcasts for a living.

The real value in podcasting is for establishments that are interested in capturing mindshare,which should always be part of your CRM or,if you still care to separate them,your corporate strategy. By providing you venues where you’re able to either educate your customers or prospects or even those outside your obvious target market,or entertain them and put a human face on the company,you are able to capture the mindshare that can be your true differentiator—if that’s what you’re after.

For example,as part of its MIT OpenCourseWare project,MIT now has most of its courses available via podcast. Anyone has access to them free of charge. There are assignments and class notes and all of them are downloadable,so you can do all the timeshifting and placeshifting you want. You can even subscribe to an RSS feed to get updates on the classes as they are created.

While you won’t earn your degree doing this,and there is some core material missing,the value for MIT is immense. You get to see the high quality of MIT offerings,and MIT itself is branded as a progressive school with a deep and abiding commitment to learning and providing knowledge. That reputation is what drives interest in becoming a student or making a donation or a bequest to MIT,rather than somewhere else.

So the real value of podcasting is thought leadership and branding. It has value as a medium because it’s portable and convenient to listen to and update. Because the customer/listener consumes it the way they want to,they are in an optimum state for listening when they do,and they develop an intimacy with the information they wouldn’t otherwisehave. It’s greatly engaging and entertaining for your customers.

There is a strong business-to-business (B2B) case to be made too,and this is leading to a growing audience for podcasts from companieslike Cisco,General Motors,Wells Fargo,and IBM. There is also a upward trend in the number of listeners,as we saw earlier.That’s the response to the “why do it if it’s not well known” query on the lips of all.

Why the popularity of podcasts in the B2B space? As Paul Gillin put it,“They’re a godsend for busy corporate executives.”

But there is a simple downside. It takes a considerable amount of time to produce one. Podcasts are expected to have some real charm. There is a bit of an expectation that a podcast will be done either by a smart amateur or by someone stepping outside their corporate persona and being an authentic voice. But there is also an expectation,due to years of television watching,that the production values will be professional,regardless of the broadcast’s authenticity or,at worst,truthiness. These are inescapable requirements—honest voice,professional production.

Thus,there is a cost to produce a podcast. The equipment costs—hardware,software,and so on—are dependent on how high a quality you are aiming at. A large enterprise is going to be expected to provide a serious,TV-quality show. That can means thousands invested. But,by the same token,a small business can get 85 percent of that professionalism for about $1,000 and a good quality show for half that or less. The real cost is labor time because you have to do a show consistently week after week or you can actually turn off your customers.

When developing a customer engagement strategy,a podcast can be a valuable tool but one that has to be approached with a good deal of care. Check ’em out for yourself. Go to either iTunes to subscribe to a few or go to Podcast Alley. Or listen to mine with Brent Leary called “CRM Playaz”. Then make your decisions. Be careful. It’s a lot of fun,though.

Let’s close this chapter with Shel Israel,who is one of the foremost bloggers in the world. We’ve got wikis to cover and miles to go before I sleep.

Mini-Conversation with Shel Israel:Three Blogging Takeaways
Shel Israel is an amazing guy. Even though he relentlessly investigates and reports on social media’s impact on business and culture all over the world,he is also one of the nicest and most responsive people you’ll meet in business.As a result of these varying traits,he has interviewed diverse people,ranging from Michael Dell,founder and CEO of Dell Computer,to Wael Abbas,who posts videos on YouTube about Egyptian police brutality. He’s also famous in the world of social media,despite his humble protestations. He’s the co-author (with Robert Scoble) of Naked Conversations:How Blogs Are Changing the Way Businesses Talk with Customers,the seminal book on business blogging. He also co-hosts (with Scoble) WorkFast,a weekly live video show for FastCompany. TV on the future of work. You need to be listening to what he’s telling you here and visiting his blog,Global Neighbourhoods. He knows from whence he came. Very savvy dude.

We are moving from an Era of Broadcast into a new Conversational Era. This changes a great deal for the modern enterprise. During this transformation,there is a sense of discomfort caused by the disruption,but an increasing number of corporate thinkers are coming to understand that there are enormous efficiencies and advantages to the relentless advance of social media into corporate
communications.

The three things that enterprise strategists need to keep in mind are: 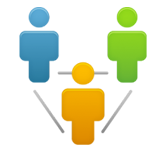