The salience of the problem of the stakeholder control of business firms is put into perspective by acknowledging that influence may matter more to stakeholders than control. Control is just one form of influence, and if exercising control is not achievable, or not feasible, for a certain stakeholder at a specific place and time, some alternative form of influencing the behavior of the firm might be appropriate and effective as well. The resource based view of the firm has brought to the fore that business firms and their stakeholders are interdependent and that firms are in need of external resources and performances from their environment in order to be able to survive and operate as a social subsystem. In this vein, Pfeffer and Salancik (1978) define an organization as “a coalition of support”. If a resource is important to the firm’s operation, then the stakeholder controlling that resource will be able to exercise a strong influence on that company. The impact of this kind of resource based external influence of a stakeholder on a firm may well exceed the influence this stakeholder could ever hope to acquire by any form of control. Resource based influence may also be much more specifically targeted at the specific interest that a stakeholder wants to defend, and applying resource based influence may therefore be much more effective and efficient for stakeholders than exercising control over a company.

Introducing the resource dependence approach in the stakeholder governance debate implies a shift away from the firm as the focal point of attention to the values chain and the network of interacting stakeholders (Rowley 1997).

The focus shifts from the role of a single organization towards the roles and responsibilities of different stakeholders such as suppliers, consumers, and governments in the whole production and consumption chain. (Nijhof et al. 2008).

Freeman et al. (2007) also identify the increased interdependence of businesses and their stakeholders as one of the hallmarks of “stakeholder capitalism”. Rather than argue about whose rights trump whose, they want to acknowledge that a large cast of stakeholders are necessary to sustain value creation.

Stakeholder dialogue and co-operation are important ways for businesses to shape their social responsibility in this situation of interdependence since businesses are often partially responsible for causing a social problem. When a business is questioned about its responsibility by its stakeholders, this business in turn can question those stakeholders just consider issues such as traffic congestion, crime, environmental issues, or the growing problem of obesity. Businesses, the government, and other stakeholders depend on each other here and have a collective responsibility. This requires a social dialogue on issues of public interest, in which all parties involved take part. A term that crops up regularly in this context is “civil society”: a society of emancipated citizens and their organizations who collectively take the responsibility, each from their own viewpoint, to actively contribute to the solution of social problems and to steer social developments in the right direction (Scherer and Palazzo 2007).

Different stakeholders can enter into partnerships with each other regarding Social issues and in doing so together create the resources that are necessary to realize a solution. An important mechanism within these partnerships is that different parties can mutually influence the conditions of their performance. By taking advantage of this, social parties and groups surrounding an issue can stimulate and support each other to an important extent. An example may clarify this (see Figure). 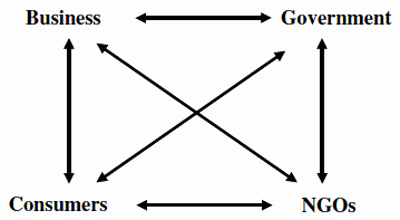 Pharmaceutical companies could even decide to be completely open to NGOs, hoping these NGOs will be less inclined to organize campaigns which can harm the company’s image, such as via boycotts. Alternatively, NGOs may find that they can also achieve their goals by consulting companies. As consumers are becoming more aware of the fate of laboratory animals, they will support NGOs which battle against animal testing. This support increases the legitimacy of these NGOs. They can gain power against companies, but they can also put more pressure on the government to develop legislation against animal testing. When more consumers are against animal testing, the government can draw up stricter laws against it. Companies which have already taken steps to reduce animal testing can encourage this legislation, for it gives them a competitive advantage. A resource based perspective on corporate social responsibility helps us understand that the responsibility for the social effects a business has lies partly outside that business’s realm, with stakeholders who can influence that business. When a stakeholder group can influence the conditions under which an ethically better option also offers a straight business advantage, this stakeholder group has a responsibility to do so. Consumers able to positively influence corporate environmental behavior by buying environmentally friendly products are partly responsible for corporate environmental behaviors.

Secondly, we can see that companies themselves have a responsibility to increase the effect of their efforts, by seeking collaboration with stakeholder groups. An interesting example of this is provided by the Roundtable on Sustainable Palm Oil (RSPO) formed in 2004 with the objective of promoting the growth and use of sustainable oil palm products through credible global sustainability standards developed through involvement of all stakeholders. The members of this association represents major players along the palm oil supply chain, namely the oil palm grower, palm oil processors and traders, consumer goods manufacturers, retailers, banks and investors, and environmental nature conservation and development NGOs. Together, these 259 (commercial) organizations account for more then 40% of palm oil production and trade worldwide. RSPO has developed a set of standards that define practices for sustainable palm oil production. These standards address the legal, economic, environmental, and social requirements of producing sustainable palm oil. An RSPO Certification system is set up to formally recognizes and authenticates growers who are producing palm oil according to the RSPO standards. The certification system can also verify any claims of using or supporting RSPO certified palm oil made by end product manufacturers and processors. With a certificate it is possible for them to claim that “this product contains RSPO certified palm oil”, “this product contains x% RSPO certified palm oil”, or to claim that “this product supports the trade in sustainable palm oil”. One scarce resource in the supply chain of sustainable palm oil turns out to be critical mass. Only when produced on a sufficiently large scale can sustainable palm oil become anywhere near being competitively viable. This situation creates a common interest among a large coalition of stakeholders to jointly make sustainable lm oil a big industry (Zengers 2009).

The transition to a commercially viable sustainable production of palm oil is something that can only be achieved through the concerted effort of many stakeholders in an industry. The question of who controls the decisions of palm oil producers, with a view to turning them towards greater sustainability, is of little relevance in this constellation of industry-wide stakeholder interdependence. It is not the level of control that matters; it is the level of resource dependence. The more stakeholders become perceived by companies as a critical resource to their own goal, the greater this stake holder’s influence will be.