It was known for some time among researchers of type systems that a rigid system of generic types is quite unpleasant to use. The Java designers invented an ingenious (but nevertheless safe) “escape hatch”: the wildcard type. For example, the wildcard type Pair<?extends Employee> denotes any generic Pair type whose type parameter is a subclass of Employee, such as

Let’s say you want to write a method that prints out pairs of employees, like this:

As you saw in the preceding section, you cannot pass a Pair<Manager> to that method, which is rather limiting. But the solution is simple—use a wildcard type: 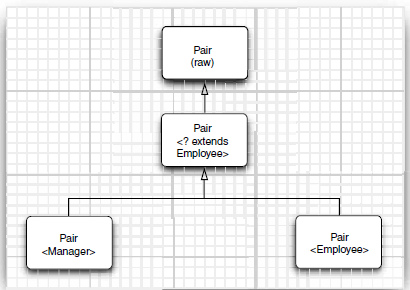 Can we use wildcards to corrupt a Pair<Manager> through a Pair<? extends Employee> reference?

No corruption is possible. The call to setFirst is a type error. To see why, let us have a closer look at the type Pair<?extends Employee>. Its methods look like this:

This makes it impossible to call the setFirst method. The compiler only knows that it needs some subtype of Employee, but it doesn’t know which type. It refuses to pass any specific type—after all, ?might not match it. We don’t have this problem with getFirst: It is perfectly legal to assign the return value of getFirst to an Employee reference This is the key idea behind bounded wildcards. We now have a way of distinguishing between the safe accessor methods and the unsafe mutator methods.

Wildcard bounds are similar to type variable bounds, but they have an added capability— you can specify a supertype bound, like this:

This wildcard is restricted to all supertypes of Manager. (It was a stroke of good luck that the existing super keyword describes the relationship so accurately.) Why would you want to do this? A wildcard with a supertype bound gives you the opposite behavior of the wildcards. You can supply parameters to methods, but you can’t use the return values.


The compiler doesn’t know the exact type of the setFirst method but can call it with any object of type Manager, Employee, or Object, but not a subtype such as Executive. However, if you call getFirst, there is no guarantee about the type of the returned object. You can only assign it to an Object. Here is a typical example. We have an array of managers and want to put the manager with the lowest and highest bonus into a Pair object. What kind of Pair? A Pair<Employee>should be fair game or, for that matter, a Pair<Object> (see Figure below). The following method will accept any appropriate Pair:

A wildcard with a supertype bound 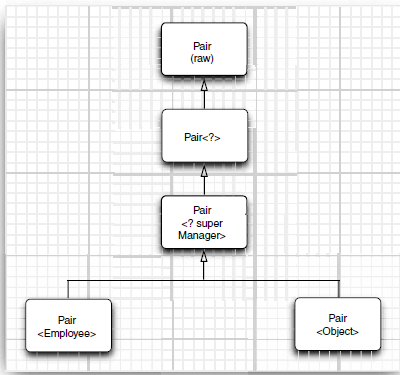 Here, the type variable indicates the type of the other parameter. For example, the String class implements Comparable<String>, and its compareTo method is declared as public intcompareTo(String other)

This is nice—the explicit parameter has the correct type. Before Java SE 5.0, other was an Object, and a cast was necessary in the implementation of the method. Because Comparable is a generic type, perhaps we should have done a better job with the min method of the ArrayAlg class? We could have declared it as public static <T extends Comparable<T>> T min(T[] a)

In a situation such as this one, supertypes come to the rescue:

Maybe it is declared to take an object of type T, or—for example, when T is GregorianCalendar— a supertype of T. At any rate, it is safe to pass an object of type T to the compareTo method. To the uninitiated, a declaration such as <T extends Comparable<? super T>> is bound to look intimidating. This is unfortunate, because the intent of this declaration is to help application programmers by removing unnecessary restrictions on the call parameters. Application programmers with no interest in generics will probably learn quickly to gloss over these declarations and just take for granted that library programmers will do the right thing. If you are a library programmer, you’ll need to get used to wildcards, or your users will curse you and throw random casts at their code until it compiles.

You can even use wildcards with no bounds at all, for example, Pair<?>. At first glance, this looks identical to the raw Pair type. Actually, the types are very different. The type Pair<?> has methods such as

The return value of getFirst can only be assigned to an Object. The setFirst method can never be called, not even with an Object. That’s the essential difference between Pair<?> and Pair: you can call the setObject method of the raw Pair class with any Object. Why would you ever want such a wimpy type? It is useful for very simple operations. For example, the following method tests whether a pair contains a given object. It never needs the actual type.

You could have avoided the wildcard type by turning contains into a generic method:

However, the version with the wildcard type seems easier to read.

Let us write a method that swaps the elements of a pair:


A wildcard is not a type variable, so we can’t write code that uses ?as a type. In other words, the following would be illegal:

That’s a problem because we need to temporarily hold the first element when we do the swapping. Fortunately, there is an interesting solution to this problem. We can write a helper method, swapHelper, like this:

Note that swapHelper is a generic method, whereas swap is not—it has a fixed parameter of type Pair<?>.

Now we can call swapHelper from swap:


In this case, the parameter T of the swapHelper method captures the wildcard. It isn’t known what type the wildcard denotes, but it is a definite type, and the definition of <T>swapHelpermakes perfect sense when T denotes that type. Of course, in this case, we were not compelled to use a wildcard. We could have directly implemented <T> void swap(Pair<T> p) as a generic method without wildcards. However, consider this example in which a wildcard type occurs naturally in the middle of a computation: