This section gives a short history of Java’s evolution. It is based on various published sources (most important, on an interview with Java’s creators in the July 1995 issue of SunWorld’s on-line magazine).

Java goes back to 1991, when a group of Sun engineers, led by Patrick Naughton and Sun Fellow (and all-around computer wizard) James Gosling, wanted to design a small computer language that could be used for consumer devices like cable TV switchboxes. Because these devices do not have a lot of power or memory, the language had to be small and generate very tight code. Also, because different manufacturers may choose different central processing units (CPUs), it was important that the language not be tied to any single architecture. The project was code-named “Green.”

The requirements for small, tight, and platform -neutral code led the team to resurrect the model that some Pascal implementations tried in the early days of PCs. Niklaus Wirth, the inventor of Pascal, had pioneered the design of a portable language that generated intermediate code for a hypothetical machine. (These are often called virtualmachines—hence, the Java virtual machine or JVM.) This intermediate code could then be used on any machine that had the correct interpreter. The Green project engineers used a virtual machine as well, so this solved their main problem.

The Sun people, however, come from a UNIX background, so they based their language on C++ rather than Pascal. In particular, they made the language object oriented rather than procedure oriented. But, as Gosling says in the interview, “All along, the language was a tool, not the end.” Gosling decided to call his language “Oak” (presumably because he liked the look of an oak tree that was right outside his window at Sun). Thepeople at Sun later realized that Oak was the name of an existing computer language, so they changed the name to Java. This turned out to be an inspired choice.

In 1992, the Green project delivered its first product, called “*7.” It was an extremely intelligent remote control. (It had the power of a SPARC station in a box that was 6 inches by 4 inches by 4 inches.) Unfortunately, no one was interested in producing thisat Sun, and the Green people had to find other ways to market their technology. However, none of the standard consumer electronics companies were interested. The group then bid on a project to design a cable TV box that could deal with new cable services such as video on demand. They did not get the contract. (Amusingly, the company that did was led by the same Jim Clark who started Netscape—a company that did much to make Java successful.)

The Green project (with a new name of “First Person, Inc.”) spent all of 1993 and half of 1994 looking for people to buy its technology—no one was found. (Patrick Naughton, one of the founders of the group and the person who ended up doing most of the marketing, claims to have accumulated 300,000 air miles in trying to sell the technology.) First Person was dissolved in 1994.

While all of this was going on at Sun, the World Wide Web part of the Internet was growing bigger and bigger. The key to the Web is the browser that translates the hypertext page to the screen. In 1994, most people were using Mosaic, a noncommercial web browser that came out of the supercomputing center at the University of Illinoisin 1993. (Mosaic was partially written by Marc Andreessen for $6.85 an hour asan undergraduate student on a work-study project. He moved on to fame and fortune as one of the cofounders and the chief of technology at Netscape.)

In the SunWorldinterview, Gosling says that in mid-1994, the language developers realized that “We could build a real cool browser. It was one of the few things in the client/ server mainstream that needed some of the weird things we’d done: architecture neutral, real-time, reliable, secure—issues that weren’t terribly important in the workstation world. So we built a browser.”

The actual browser was built by Patrick Naughton and Jonathan Payne and evolved into the HotJava browser. The HotJava browser was written in Java to show off the power of Java. But the builders also had in mind the power of what are now called applets, so they made the browser capable of executing code inside web pages. This “proof of technology” was shown at SunWorld ‘95 on May 23, 1995, and inspired the Java craze that continues today.

Sun released the first version of Java in early 1996. People quickly realized that Java 1.0 was not going to cut it for serious application development. Sure, you could use Java 1.0 to make a nervous text applet that moved text randomly around in a canvas. But you couldn’t even print in Java 1.0. To be blunt, Java 1.0 was not ready for prime time. Its successor, version 1.1, filled in the most obvious gaps, greatly improved the reflection capability, and added a new event model for GUI programming. It was still rather limited, though.

The big news of the 1998 JavaOne conference was the upcoming release of Java 1.2, which replaced the early toylike GUI and graphics toolkits with sophisticated and scalable versions that come a lot closer to the promise of “Write Once, Run Any where”™ than its predecessors. Three days after (!) its release in December 1998, Sun’s marketing department changed the name to the catchy Java 2 Standard Edition Software DevelopmentKit Version 1.2.

Versions 1.3 and 1.4 of the Standard Edition are incremental improvements over the initial Java 2 release, with an ever-growing standard library, increased performance, and, of course, quite a few bug fixes. During this time, much of the initial hype about Java applets and client-side applications abated, but Java became the platform of choice for server-side applications.

Version 5.0 is the first release since version 1.1 that updates the Java language in significant ways. (This version was originally numbered 1.5, but the version number jumped to 5.0 at the 2004 JavaOne conference.) After many years of research, generic types (which are roughly comparable to C++ templates) have been added—the challenge was to add this feature without requiring changes in the virtual machine. Several other usefullanguage features were inspired by C#: a “for each” loop, autoboxing, and metadata. Language changes are always a source of compatibility pain, but several of these new language features are so seductive that we think that programmers will embrace them eagerly.

Version 6 (without the .0 suffix) was released at the end of 2006. Again, there are no language changes but additional performance improvements and library enhancements.

The evolution of the Java language and library. As you can see, the size of the application programming interface (API) has grown tremendously.

Evolution of the Java Language 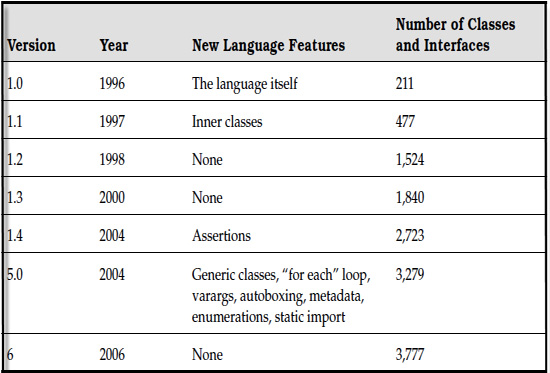