Source programs are accepted as a sequence of lines(or records)of 80 characters or less. Each line is divided into five areas, as illustrated below.

The sequence number and identification areas are used for clerical and documentation purposes. They are ignored by the compiler.

The indicator area is used for denoting line continuation, comments and debugging.

Areas A and B contain the actual program according to the following rules:

The line being continued is called the continued line. Any word, literal, or PICTURE character-string may be broken in such a way that part of it appears on a continuation line, according to the following rules:

A blank line is one that is blank in the indicator, A and B areas. A blank line can appear anywhere in the source program.

A comment line is any line with an asterisk or a slash in the indicator area of the line. A comment line may appear as any line after the Identification Division header of a source program and as any line in library text referred to by a COPY statement. Any combination of characters from the character set of the computer may be included in area A and area B of a comment line. Comment lines are reproduced on the listing but serve as documentation only.

The character-strings and separators comprising pseudo-text may start in either area A or area B. If there is a hyphen in the indicator area of a line that follows the opening pseudo-text delimiter, area A of the line must be blank and the normal rules for continuation of lines apply to the formation of text words.

A debugging line is any line with a D in the indicator area of the line. Any debugging line that consists solely of spaces from margin A to margin R is considered the same as a blank line.

The content of a debugging line must be such that a syntactically correct program is formed with or without the debugging lines being considered as comment lines.

A debugging line will be considered to have all the characteristics of a comment line if the Debug Compile Command Option is not specified and the WITH DEBUGGING MODE clause is not specified in the SOURCE-COMPUTER paragraph.

Source statements always begin with a keyword called a verb.There are four kinds of statements:

A conditional specifies that the truth value of a condition is to be determined and that the subsequent action of the object program is dependent on this truth value.

A conditional statement is one of the following:

A conditional phrase is one of the following:

The imperative verbs are listed below

When statements are nested within other statements, a separator period that ends the sentence implicitly terminates all nested statements.

When statements are nested within other statements that allow optional conditional phrases, any optional conditional phrase encountered is considered to be the next phrase of the nearest preceding unterminated statement with which that phrase is permitted to be associated but with which no such phrase has already been associated. An unterminated statement is one that has not been previously terminated either explicitly or implicitly.

A sentence is a sequence of one or more statements terminated by the period separator. There are three kinds of sentences:

An entry is an item of descriptive or declaratory nature made up of consecutive clauses. Each clause specifies an attribute of the entry. Clauses are separated by space, comma, or semicolon separators. The entry is terminated by a period separator.

With the exception of COPY and REPLACE statements and the end program header, the statements, entries, paragraphs, and sections of a source program are grouped into four divisions which are sequenced in the following order: 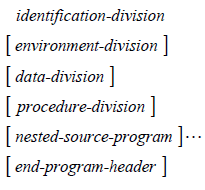 end-program-header must be present if either of the following circumstances exists: 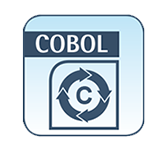