A popular way of integrating public and private clouds is using Eucalyptus. Eucalyptus is an open source software platform that implements IaaS-style cloud computing using the Linux-based infrastructure found in many modern data centers. While it can be deployed solely for private clouds, because it is interface-compatible with Amazon’s AWS, it is possible to move workloads between AWS and the data center without code modification. 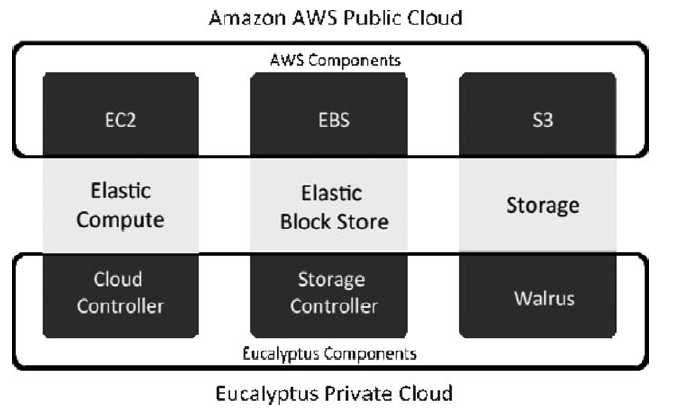 Many other cloud vendors support Eucalyptus, so today, it is the most portable option available. Eucalyptus also works with most of the currently available Linux distributions, including Ubuntu, Red Hat Enterprise Linux (RHEL), CentOS, SUSE Linux Enterprise Server (SLES), openSUSE, Debian, and Fedora. Importantly, Eucalyptus can use a variety of virtualization technologies, including VMware, Xen, and KVM, to implement the cloud abstractions it supports. Eucalyptus’s Walrus is an S3-compatible implementation of cloud storage. It is well-described in The Eucalyptus Open-source Cloud-computing System.

The Ubuntu Enterprise Cloud (UEC) is powered by Eucalyptus and brings an Amazon EC2-like infrastructure inside the firewall.12 It appears that the recently announced Nimbula, which supports private versions of EC2, is similar.

Ubuntu UEC is open source, with commercial support available from Canonical Ltd., a company founded (and funded) by South African entrepreneur Mark Shuttleworth (formerly the official maintainer of Debian, a version of Linux, and founder of Thawte Consulting) for the promotion of free software projects. Canonical is registered in the Isle of Man (part of the Channel Islands), a favorable tax jurisdiction, and employs staff around the world, as well as in its main offices in London. Ubuntu JeOS is an efficient variant of Ubuntu configured specifically for virtual appliances.

Eucalyptus Features and Benefits
The most attractive features of Eucalyptus are:

The benefits of Eucalyptus include: 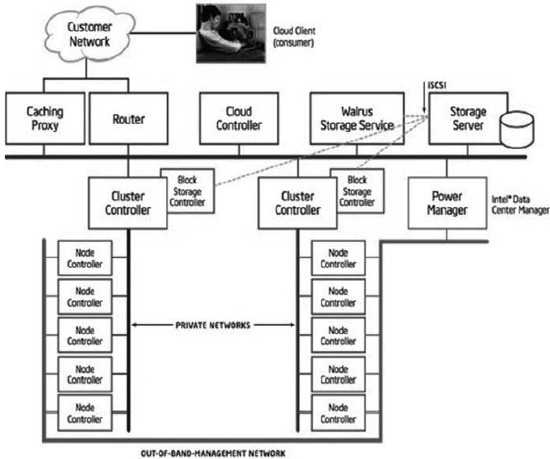 Eucalyptus Enterprise Edition 2.0 was built on the core Eucalyptus open source platform, with additional functionality designed to optimize the building and deploying of massively scalable, high performance private clouds in the enterprise. The latest release adds support for Windows Server 2003 and 2008 and Windows 7 virtual machines. (Previously, only Linux images were supported). Other changes include new accounting and user group management capabilities, allowing administrators to easily define groups of users and allocate different levels of access based on a group’s needs.

The benefits of Ubuntu Enterprise Cloud (UEC) include:

Like most open source solutions, the basic product is free, and an “Enterprise Version” offering support and additional features is available for a charge.

From Do It Yourself To Public Cloud—a Continuum

Cloud Computing: Is It Old Mainframe Bess In A New Dress?

Moving Into And Around The Clouds And Efforts At Standardization

Scale And Reuse: Standing On The Shoulders Of Giants

Google In The Cloud