CohesiveFT states that it “provides customers with a cloud container approach that protects them from un-needed differentiation and vendor lock-in.”

CohesiveFT has been providing enterprise-grade virtualization and cloud products since 2006 (Elastic Server and VPN-Cubed). . . . Our Cloud Container process is an experience informed methodology proven to take . . . the relevant aspects of their existing physical infrastructure, and create a Cloud Container Solution to enable the rapid on-demand deployment of the cluster topology in cloud environments. CohesiveFT's founders bring enterprise technology expertise to their products and claim to be focused on delivering cloud "on-boarding solutions" for companies with a suite of three products: Elastic Server® for template based assembly of virtual servers, VPN-Cubed® for securing and controlling cloud networking, and Context-Cubed® for managing boot time configuration of virtual servers.

The Elastic Server platform is a web-based “factory” [offered by CohesiveFT] for assembling, testing, and deploying custom stacks and servers to virtual machines or clouds. These custom Elastic Servers can be comprised of open source, third-party or proprietary software components from multiple vendors, saved as templates, updated, augmented, or redeployed in minutes. Made-to-order application stacks mean faster assembly and limitless configurations. The Bring Your Own feature lets you pull in your project from GitHub or upload custom components.

Sound security practices and compliance with data protection regulations boils down to control. If you do not encrypt you data as it moves around the internet, within each hosting facility, and inside each cloud provider's network - do not sign you companies quarterly compliance report, because you are taking unacceptable risk.

In 2008, experts in the cloud computing business were expressing concern and frustration with the lack of security and control with public clouds. At that time, CohesiveFT invented VPN-Cubed, a novel solution, and began the US Patent process. CohesiveFT filed the original patent application(s) for VPN-Cubed on October 21, 2008. A copy of the full patent document for: "A System and Methods for Enabling Customer Network Control in Third-Party Computing Environments" can be found at: US Patent Office:

Elastic servers are assembled from bundles, which are groups of packages. You can build your own private packages and turn them into bundles.A server’s bill of materials is a permanent record of the bundles used to create it, and can be used to recreate the server at any time for multiple virtualization and cloud platforms. 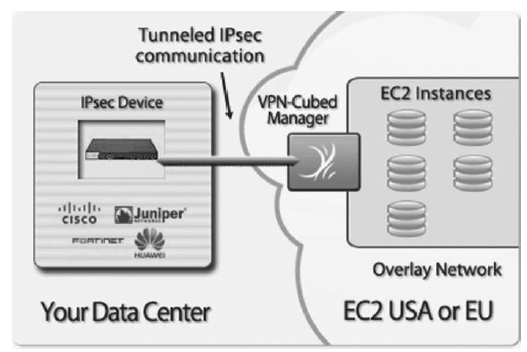 VPNCubed provides an overlay network that allows customer control of addressing, topology, protocols, and encrypted communications for YOUR devices deployed to virtual infrastructure or cloud computing centers. When using public clouds, your corporate assets are going into 3rd party controlled infrastructure. Enterprise checks and balances require you to exhibit control over your computing infrastructure. VPNCubed gives you flexibility with control in third-party environments.