As the DTMF stated in its white paper on Interoperable Clouds, the goal of the Cloud Incubator is “to define a set of architectural semantics that unify the interoperable management of enterprise and cloud computing.” Building blocks provided will be used “to specify the cloud provider interfaces, data artifacts, and profiles to achieve interoperable management.”It outlines its deliverables thus:

The Phase 1 deliverables—reference architecture, taxonomy, use cases, priorities, submissions from vendors, and existing standards and initiatives— will be analyzed to deliver one or more cloud provider interface informational specification documents, which will be the basis for the development of future cloud standards. These documents will describe functional interfaces, protocols, operations, security, and data artifacts. These building blocks are being worked on, but have not yet been published. Phase 2 will deliver a recommendation for each standard, which will include the gaps and overlaps as well as abstract use cases (usage scenarios that describe one or more business contexts) applicable to the sub-domain of each standard. 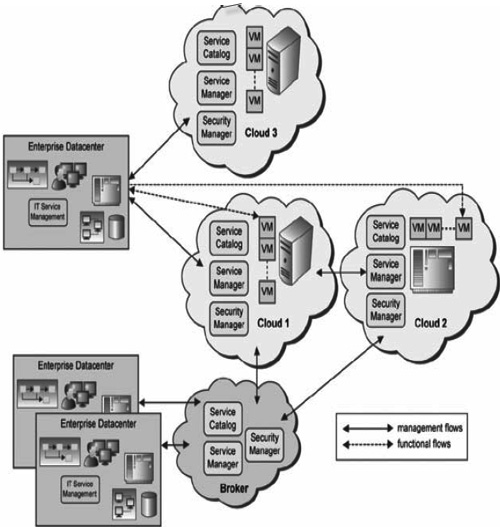 The evolution of cloud standards is coordinated by cloud-standards. org, and they maintain a Wiki for that purpose.

OCC seems to be an effort driven mostly by Yahoo! and its university research partners. However, its concerns are industry-wide; its Working Group on Standards and Interoperability For Large Data Clouds (one of four working groups at this writing) focuses on developing standards for interoperating large data clouds. For example, what are standard interfaces to storage clouds and compute clouds? What are appropriate benchmarks for large data clouds? The group is concerned with an architecture for clouds popularized by a series of Google technical reports that consists of a storage cloud providing a distributed file system.

A compute cloud supporting MapReduce is a patente software framework introduced by Google to support distributed computing on large data sets on clusters of computers and a data cloud supporting table services. The open source Hadoop system follows this architecture. The working group uses the name large data clouds for these types of clouds.

One big challenge with today’s PaaS offerings is that they are all fairly unique and incompatible with one another and with the way that enterprises run their applications. Once you select a PaaS offering, it is easy to become locked into their particular offering, unable to easily move your applications and data to another PaaS provider or back into your own datacenter should the need arise, which is a challenge for cloud computing as a whole.

Google’s Vint Cerf says that what we need is Intercloud, a goal that Google, VMware, and several others are working to address within the DMTF45 including the Open Virtualization Format Specification. Just as personal computers didn’t really take off until there were just two standards (Apple and IBM-compatible), so too we can expect to see Interclouding, once supported by all major vendors, to greatly accelerate movement to the cloud.