When looking at the size of firms it is important to define the terms used in official data. The firm, or ‘enterprise’, is the organisation as a whole, and it might be comprised of several units or ‘establishments’. Small firms like the corner shop will mostly be enterprises with only one establishment. Large firms like Sainsbury’s will have many establishments as they have branches in most towns.

Many different ways are there to measure the size of firms. Among them some common measures used are turnover, the value of output, the capital employed or the level of employment. Such measurement is beset by problems, not least the difficulty of defining the small firm, as will be seen later. The three measures mentioned above might give conflicting pictures, as an industry which is becoming increasingly mechanized will probably have rising levels of average capital employed and output but falling average levels of employment. Table shows the ‘top ten’ companies in the United Kingdom using two of these measures and it illustrates the point that different measures of the size of a firm will give different rankings.

Some of these names will be familiar to the reader while others are less so. Compass Group plc, for example, is a food service organisation which provides catering and support services to its clients.

Many of the large companies listed in Table operate in more than one country and are therefore multinationals. An enterprise operating in several countries but managed from one (home) country. Generally, any company or group that derives a quarter of its revenue from operations outside of its home country is considered a multinational corporation. A multinational corporation often has a long supply chain that may, for example, require the acquisition of raw materials in one country, a product's manufacture in a second country, and its retail sale in a third country. A multinational often globally manages its operations from a main office in its home country. 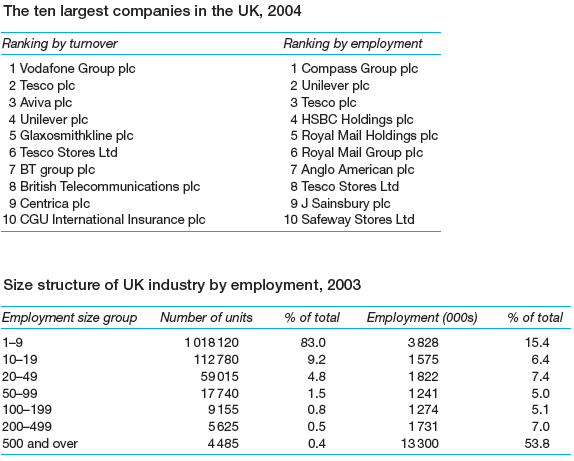