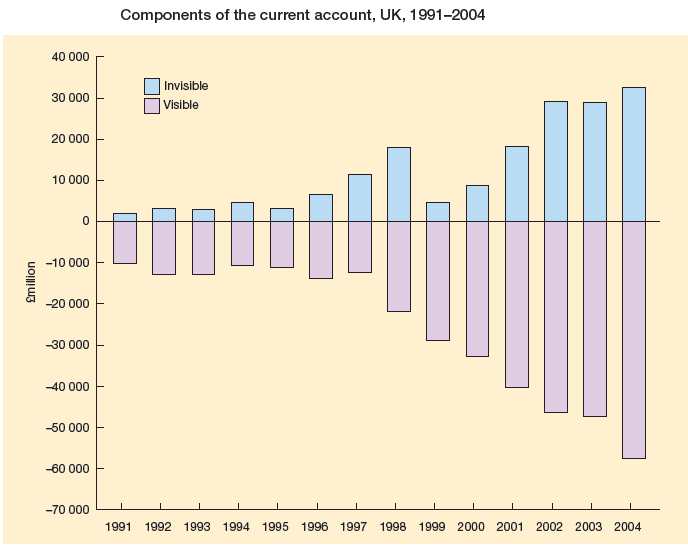 Patterns of trade
Over time, patterns of trade change, for many reasons, Table shows UK patterns of trade by destination/source and Table shows UK trade by type of good. From these tables it is possible to look at how the country’s patterns of trade have changed. The most obvious change, as can be seen in Table, is that trade with the EU has become more important over the last 30 years while trade with the rest of western Europe has declined. In 2003 58 per cent of Britain’s imports came from the EU and nearly 60 per cent of exports went to the EU. Despite this, the USA has remained important to Britain and has become more important both for imports and exports since 1990. There has been a decline in Britain’s trade with other OECD countries over the whole period, although the importance of Japan within that group has increased, particularly with respect to imports. Britain’s trade with the oil-exporting countries has declined in importance, as too has trade with the rest of the world, although this increased between 1990 and 2003. The rest of the world includes many of the old Commonwealth countries, which at one time were Britain’s biggest markets. Since 1970 the United Kingdom has been importing less food and fewer animals for consumption. The impact of oil can be seen in Table, as the quantities of oil-related products imported into the United Kingdom have fallen over the period.

Manufacturing is clearly the most important category of good as far as the balance of payments is concerned. Manufacturing has retained its importance for exports, accounting for 76 per cent of exports in 1970 and 67 per cent in 2003. As far as imports are concerned, the percentage has increased a great deal over the last 30 years. The United Kingdom is now a net importer of manufactured goods. In 2003 the value of imported manufactured goods was £168 810 million, whereas the value of exported manufactured goods was £125 055 million. One reason for this is the increased import penetration in the United Kingdom. Table shows import penetration in UK manufacturing for 1970, 1980, 1990, 1994, 1996 and 2003, from which it can be seen that the penetration has increased over this time period.