Techniques
To assist in an analysis of the business environment, organisations can make use of a wide variety of techniques, ranging from those involving quantitative measurements and predictions to the more qualitative approaches involving judgement and associated with opinion canvassing. In practice the choice of technique(s) used will tend to be conditioned by a variety of factors, including the type of information required, the extent and accuracy of data available, the time factor, resource constraints and the perceived importance of the forecast to the process of organizational decision making.
Trend extrapolation
As its name suggests, trend extrapolation is essentially a technique for predicting the future based on an analysis of the past. Implicit in this is the assumption that, in the short run at least, most factors tend to remain fairly constant and critical changes in the key variables are unlikely to occur. Accordingly, extending present trends into the future is seen as a useful means of anticipating forthcoming events and tends to be one of the techniques most frequently used by business organizations seeking a relatively simple and in expensive means of forecasting.
At its simplest level, trend analysis tends to be used to predict changes over time(e.g. in the likely demand for a product), a process which can sometimes prove relatively accurate where there are sufficient historical data to allow seasonal and cyclical fluctuations to be taken into consideration. The analysis can also be refined to examine an observed relationship between one factor (e.g. sales) and another(e.g. levels of disposable income) and can even be extended to the simultaneous consideration of several variables felt to influence the subject under consideration(e.g. by using multiple regression techniques). In addition, techniques also exist to investigate causal or explanatory factors that link two or more time series together(e.g. statistical modelling techniques) and to consider the likely impact on fore casted trends of a range of factors, identified by analysts as likely both to occur and to have an effect on the predicted outcome. The latter technique is generally known as ‘trend–impact analysis’ and is sometimes used by large companies in conjunction with other methods of forecasting, including the Delphi approach and opinion canvassing.The fundamental drawback in the use of trend analysis as a forecasting tool is that there is no guarantee that the trends identified from historic patterns will continue in the future; sudden discontinuities such as the United Kingdom’s decision to leave the ERM can invalidate or undermine the existing assumptions on which a trend was predicted. In a majority of cases, trends are based on a series of patterns or relationships among a wide range of variables, a change in any one of which c and rastically alter the future course of events. These variables are not always easy to identify and the interactions between them are not necessarily fully understood.Attempts to link a simple cause with a simple effect run the danger of underestimating the complexities of the business environment.
Scenario writing
Scenario writing is essentially an attempt to paint a picture of the future; it is designed to provide a realistic description of possible future developments within the environment and/or an industry and to consider their likely impact on theorganisation should they occur. This technique which often includes ‘best case’,‘worst case’, ‘most likely case’ predictions helps organisational decision makers to anticipate potential changes in the environment and to consider appropriate responses should such changes occur; as such it can be a useful stimulus to risk analysis and contingency planning in a corporate context.In practical terms, organisational approaches to scenario writing can vary quite considerably. In some cases the technique if used at all is likely to be no more than a general prediction of the future based on relatively informal discussions between senior management, and will accordingly tend to be conditioned by the subjective judgements of the individuals concerned and by the influences upon them. In other cases, a more complex analysis of the future may occur, using a range of techniques which may include canvassing the views of individuals outside the organisation with no vested interest in its fortunes. While scenario building is appropriate to all types and sizes of organisations and at all stages of their existence, Porter has argued that it is a particularly useful tool for emerging industries, where uncertainty tends to be considerable and where the only certainty is that change will occur. Through a structured analysis of possible developments in product/technology, markets and competition and their likely consequences, Porter claims that firms in an emergent industry will be in a position to examine where they stand and how they can behave strategically should one or other predicted scenario occur. For some firms, such an analysis will provide a means of establishing the key events which will signal whether one scenario or another is actually occurring, and this can guide their actions. For others, with sufficient resources, it may encourage them to direct their efforts towards causing the most advantageous scenario to occur and, in doing so, it will strengthen their ultimate position within the industry.
Expert opinion: the Delphi method
To predict future developments or to build likely scenarios, some organisations turn to experts, an increasing number of whom work as consultants. These experts often operate as a group to produce an analysis which is presented to management in the form of a report or which emanates from a discursive technique known as ‘brainstorming’.Alternatively, the organisation may prefer to canvass the views of ananonymous panel of experts, using a technique known as the Delphi method, which was originally developed by the Rank Corporation in the United States to forecast likely military events.

In essence the Delphi approach involves eliciting opinions from a group of experts who operate individually, and anonymously, unaware of the other members of the group. Each expert is asked to respond to an initial set of questions and the answers are clarified and tabulated by a neutral investigator who uses them to generate a more refined set of questions that are then put to the experts. Following their replies, further revisions may occur and the respondents may be asked again to provide another set of predictions that take into account the information provided in the earlier replies. This process may continue for several rounds until a measure of convergence occurs between the views of the panel and a form of consensus is reached on likely future developments. As a technique the Delphi method tends to be expensive and time-consuming and there is no guarantee that a clear view will emerge. It can, however, be used to investigate any aspect of a firm’s envi-ronment and to identify not only the effects of predicted changes, but also their causes, and this information may be incorporated into other forms of environmental analysis of both a qualitative and quantitative kind.

Cross-impact matrices
The cross-impact matrix provides a more complex means of assessing and forecasting environmental change than some of the other methods previously described. Under this approach, analysts identify a set of events that are forecast to occur within a given time period, and specify not only the expected timing of each event but also its probability of occurrence. Arranging these events in anticipated chronological order in rows and columns of a matrix permits attention to be focused on the interaction between the events and, in particular, on the extent to which one may influence the timing or likely occurrence of another.As a means of predicting likely interactions between anticipated future developments, cross-impact analysis serves at least two significant purposes. First, it can be used to check the consistency of the various forecasts which go into it such as the prediction of events and their relationships given that inconsistencies will become apparent from an analysis of the results. Second, it provides a means of identifying events and trends that will have the greatest impact on subsequent developments, whether they be in individual segments of the environment or across a range of segments, as in the case of interactions between economic, technological, social and political factors. 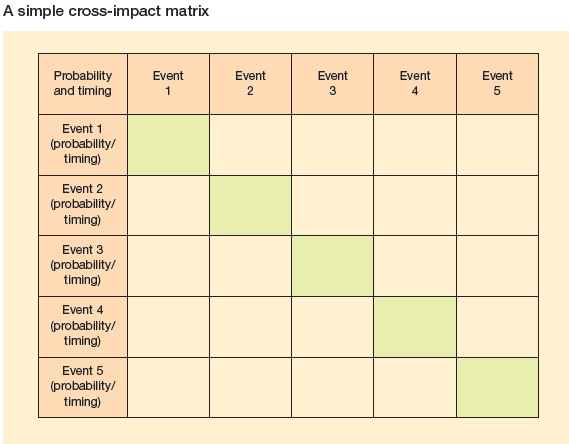 ‘SWOT’ or ‘TOWS’ analysis
It is widely accepted that corporate performance is influenced by a combination of internal and external factors. These factors can be characterized as the organisation’s internal ‘strengths’ and ‘weaknesses’ and its external ‘opportunities’ and‘threats’. Systematically analyzing these factors as an aid to strategic decision making represents a form of situational analysis known commonly by the acronym‘SWOT’ (or ‘TOWS’).
The starting-point for a SWOT analysis is usually a review of the organisation’s internal strengths and weaknesses, which may be undertaken by management or by external consultants brought in to provide a more objective view. The identified factors which have been listed may then be given scores to indicate their importance,with the more significant issues receiving a larger score. This process is then repeated for the firm’s external opportunities and threats in order to highlight those external factors which are likely to occur and which are expected to have an impact on the organisation’s future position. The resultant SWOT grid can then be used to focus attention on the key environmental influences faced by the organization and to consider how far current strategy is relevant to the changes taking place in the business environment. 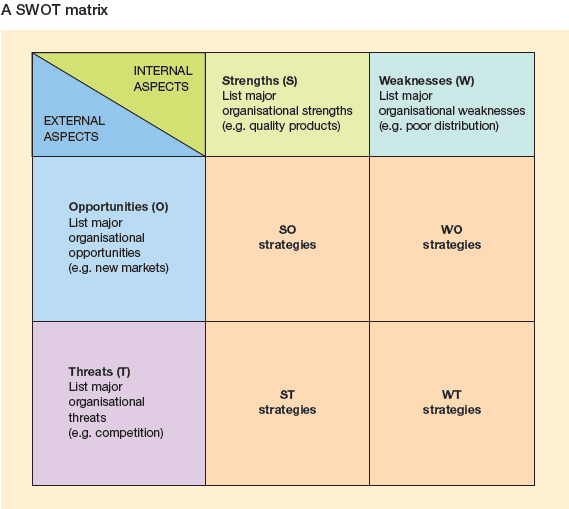 It is worth pointing out that the analysis of opportunities and threats cannot be absolute, since what might at first appear to be an opportunity may not be so when viewed against the organisation’s resources or its culture or the expectations of its take-holders. Moreover, the true value of the SWOT approach lies not in the listing of influences but in their contribution to the formulation of appropriate organization strategies. One means of focusing attention on the latter is to produce a SWOT (TOWS)matrix which matches the firm’s opportunities and threats against its internal strengths and weaknesses. The result is four sets of possible strategic alternatives termed SO, ST, WO and WT strategies which range from the positive exploitation of strengths in order to take advantage of opportunities to the essentially defensive strategy of minimizing weaknesses and avoiding anticipated threats.