As indicated in Chapter, People are important in the economy as both producers and consumers of goods and services. For most products that are produced people are the most important input into the production process. Therefore the quantity and quality of the people available in an economy will have a considerable impact upon the economy’s ability to produce.

The quantity of people available for work depends upon a variety of factors:

As well as the quantity of labour, productivity will be affected by its quality. This inturn depends upon:

Some of the quantitative factors have already been discussed in the previous section. In this section we concentrate on the idea of the ‘workforce’ and associated issues, before considering the question of labour quality.

The workforce in 2003 was 30.2 million, which is about 51 per cent of the total population. The importance of the workforce is two fold: it produces the goods and services needed in the economy; and through the payment of taxes it supports the dependent population (i.e. the very old and the very young).

An important determinant of the size of the workforce is the participation rate(i.e. the proportion of the population who actually work).

Table shows that the participation rate for women was 56 per cent in the summer of 2003; somewhat lower than the male figure of 71 per cent. The figures have, however, been converging over the years. Activity rates were higher for married than unmarried women. The trend has been for increased participation rates for women over time as families have become smaller and because of the changing role of women in society as a whole, labour-saving devices in the home, and government legislation to promote equal pay and treatment. Also important in this process are the changes in industrial structure which have led to more part-time service jobs.

Wages
It is clear that wages will affect how much people are willing to work and therefore the overall supply of labour in the economy. The analysis here will use the basic tools of demand and supply described in Chapter. It is advisable to review that chapter before proceeding. The market for labour can be likened to the market for any other commodity, in that there will be a demand for and a supply of labour. The demand for labour will come from the firm which wishes to produce goods and services that can be sold in the market. The demand for labour is a‘derived demand’ as its demand is derived from the demand that exists for what it produces. The demand curve can be assumed to be a normal downward-sloping demand curve which indicates that everything else being equal as the wage rate goes up the demand for labour goes down. The supply of labour comes from people. It is equally likely that the total supply curve has the normal upward slope, indicating that as the wage rate increases the supply of labour increases. It is argued that as the wage rate increases past a certain level people would prefer to substitute leisure for wages. The individual supply curve will therefore bend backward sat that wage rate. The total supply curve, however, will be upward sloping, indicating that those not working will be encouraged to offer their services and that those already working might be encouraged to work overtime.

Assuming for the time being that the labour market is a totally free market, the wage rate and the amount of labour being used will be determined by the forces of demand and supply, as in Figure. The equilibrium wage rate is £W and the equilibrium quantity of labour is L. If there is a change in the level of demand or supply, there will be a corresponding change in the wages and quantity of labour. 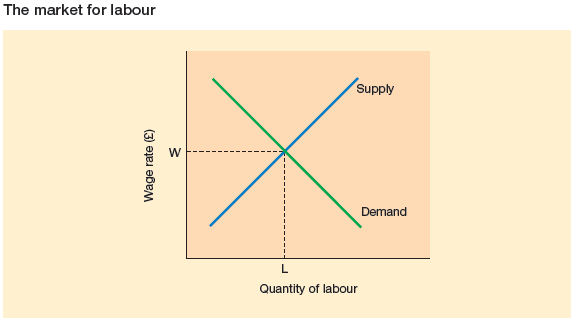 Trade unions and wages
There are four different types of trade union:
1 Craft unions. They represent one particular craft or skill, like the Boiler makers Union, which was formed in 1834 and was the longest-lived craft union in the TUC when it merged with the GMB in 1982. These were the earliest type of union.Industrial unions. They have members doing different jobs but in the same industry.
2.Industrial unions are more common in other countries but some UK unions come close to this type; for example, the National Union of Miners.
3 General unions. They contain members doing different jobs in different industries, like the Transport and General Workers Union.
4 White collar unions. They represent the non-manual workers like teachers, social workers, and so forth. An example is UNISON.

One of the main aims for all types of union has been to counter act, and protect their members from, the power of the employer. As far as wages are concerned, this has been achieved through collective bargaining. Over the years a situation has been reached where hardly any wage contracts are negotiated individually. Rather, they are collectively negotiated by trade unions and employers. Although there does seem to be a trend away from collective bargaining, coinciding with the anti-trade union legislation of the 1980s and decline in the membership and power of the trade unions,the majority of wage increases are still negotiated by trade unions.

It is argued that the activities of trade unions through collective bargaining have served to increase the wage rate above its equilibrium level and thus cause unemployment. Figure demonstrates this effect. Assume that the market clearing wage rate is £W and the quantity of labour being used is L. Assume now that a trade union enters the market that has the power to enforce a wage increase to£W1. At this wage rate the market does not clear, the demand for labour is L1 while the supply of labour is L2. There is therefore excess supply of labour, or unemployment. In this way trade unions are blamed for keeping wages at too high a level so that the market cannot clear.

Figure can be used to illustrate the argument of those who oppose the setting of a minimum wage (see Mini case: The minimum wage). Although this argument seems plausible enough, it is not quite as simple as it seems. There are other market imperfections which prevent the market from operating as smoothly as suggested and which contribute towards creating unemployment. There are some industries which have only one or two employers who can exercise a great deal of power over the market. The arguments over the minimum wage are also more complicated and center on much wider economic and social issues. There are additional factors which may prevent people moving easily and smoothly between jobs. For example, people may not easily be able to change jobs if they are geographically or occupationally immobile. 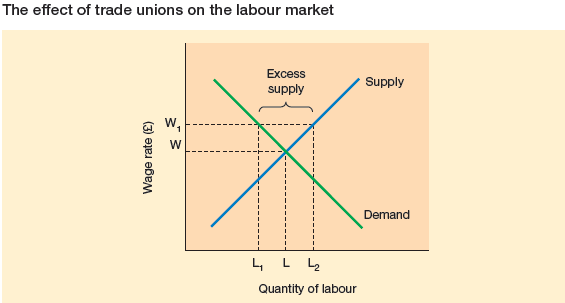 Immobility of labour
People are geographically immobile for a variety of reasons:

In order to help people to be more mobile so that the labour market works more smoothly, the government over the years has evolved a variety of policies. Job centers and the like attempt to overcome the lack of knowledge of jobs that are available. Training schemes are offered so that people can retrain, and relocation allowances can be paid to alleviate the cost of moving. Government policy in this area is considered more fully in Chapter.

These are some of the factors that determine the number of people who are available in an economy for producing goods and services. However, it is not just the quantity of labour but also its quality that is important. The quality of the workforce is determined by many factors already mentioned, but most importantly by the level of education and training of the workforce.

In the UK, a stated aim of the goverment is to increase the proportion of young people staying on at school after the statutory minimum leaving age. And although the staying on rate has improved since the 1970s it still remains low internationally.
In 2004 only 73 per cent of 17-year-olds in the UK were still in full-time education compared with 90 per cent in France, Germany and Finland. One such policy is the payment of Educational Maintenance Allowances (EMAs) to young people as an incentive to stay on in full-time educaiton after the age of 16. It is too soon to judge the success of this policy but there is evidence from other countries that similar schemes have been successful in reducing the drop-out rate. The UK government also has in place policies aimed towards vocational courses for theover-16s. Table gives some examples of these.

In 2004 these were all brought together as a National Qualifications Framework,part of which is shown in Table.

The UK government has used a variety of policies in an attempt to increase educational attainment and training. These include:

As well as school and higher education, job-related training is important in improving the quality of the workforce. Training at work can be of two types: on-the-job training and off-the-job training. There has been the development of a competence based approach to training, which partly stems from the introduction of NVQs. The system is designed to be easily understood and to provide workers with the skills that are needed by industry. It is designed to unify what is a very diverse system of qualifications existing in the United Kingdom at present.

The government sponsors training program in the UK for adults, aimed at long-term unemployed or disadvantaged adults. Successful completion of these program has increased over time, and the proportion still unemployed after the scheme fell from 53 per cent in 1990 1 to 48 per cent in 1999/2000.

By October 2005, over 30 000, UK organisations had achieved recognition under the standard, representing 38 per cent of the UK workforce.

The number of women receiving job-related training has increased over the last twenty years relative to men, and there has been a gradual increase for both sexes over the time period. There are significant differences between industries, with, for example, the service sector having a much higher level of training than agriculture, forestry and fishing, and between occupations. 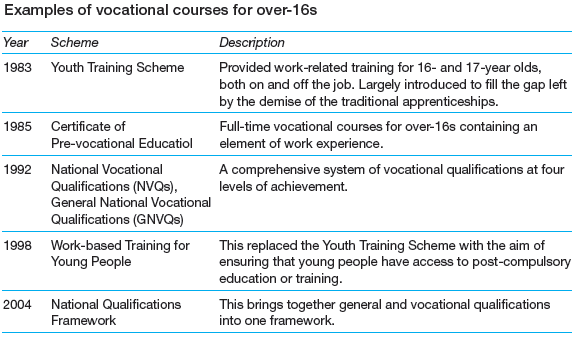 Occupational structure of the population
There will be changes in the occupational structure of the population over time.
These will be caused by changes in industrial structure and technological change. There has been an increase in the number of non-manufacturing jobs at the same time as a fall in the number of manufacturing jobs. There are more women in the workforce now because there has been an increase in demand for the types of goods that have been produced by women. There has also been an increase in the availability and quality of labour-saving devices in the home, which has released women into the workforce. There has been a decrease in the average family size so that if women leave the workforce to look after their children they now do so for a shorter period of time. There has also been a change in attitude towards women working.

Figure shows the structure of occupations in the UK by gender. There is a higher percentage of men than women in the professional/managerial occupations and there are more men working in skilled trades than women. Women are clearly concentrated in clerical/selling-type occupations. 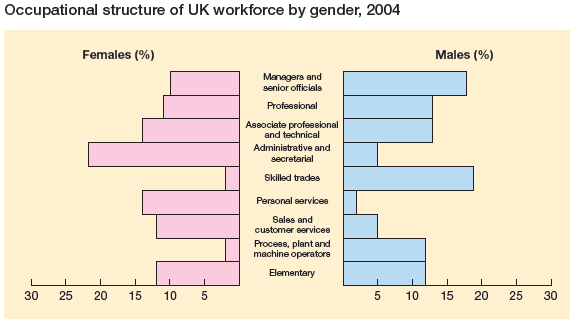 There has been a fundamental change in the nature of working life throughout the 1980s and on into the 1990s, and this has to do with the notion of ‘flexibility’. There has been an increase in the incidence of part-time working, for both men and women, and an increased use of temporary contract and flexible working patterns. In 2005, 7.3 million people worked part time in the UK; this represents about a fifth of the workforce. Approximately 3.6 million people were self-employed. It was estimated that by 2003, 45 per cent of all employees were working part time.