It has been shown that as long as other factors affecting demand remain constant, a decrease in price would be expected to increase the quantity demanded by consumers.

This knowledge is obviously of importance to business, in that it implies that sales will expand as the good becomes more price competitive. It does not, however, say anything about the degree to which sales might increase. As prices change, will demand change by a large or a small amount? At the end of the day, will the extra sales bring in more or less total revenue? In short, a measure is needed of the responsiveness of demand to price changes. In the same way the responsiveness of quantity demanded to other factors like income or other prices can also be measured. It is also important to be aware of the responsiveness of supply to changes in prices. All of these are measured by the concept of elasticity.

Price elasticity of demand
Figure illustrates two different-shaped demand curves and shows the effect of a price increase from 40p to 60p in each case. On the left-hand diagram, the increase in price causes demand to fall from 25 to 20 units. Total revenue received by the producer (i.e. price multiplied by the number of units sold) changes from£10.00 (40p -- 25 units) to £12.00 (60p -- 20 units). As illustrated, the area A represents the gain in revenue as a result of the price change, while B shows the loss of revenue. In this case there is a clear net gain. The reason for this is that the significance of the price rise is greater than the fall in demand. Compare this with the right-hand diagram. The same price rise now causes total revenue to fall from £20.00 (40p 50 units) to £6.00 (60p 10 units). The loss of revenue, area B1, is clearly greater than the gain in revenue, area A1. There is a net loss of revenue. This is a situation where the decrease in demand is of greater significance than the increase in price. The traditional way of measuring the responsiveness of demand to a change in price is via the concept of price elasticity, the formula being:
Price elasticity Percentage change in quantity demanded
=
of demand (Ep) Percentage change in price 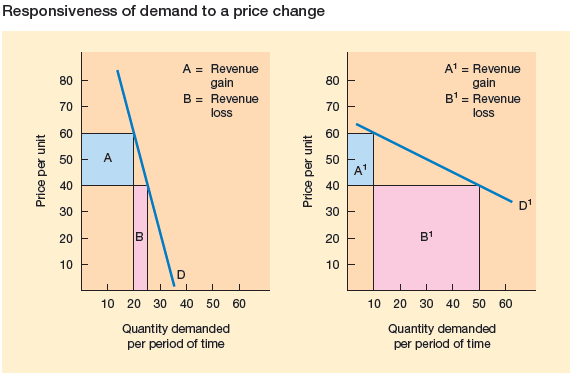 Calculating elasticity
From the information portrayed in Figure, in the left-hand diagram price rose from 40p to 60p and demand fell from 25 to 20 units; thus:

This shows that demand is inelastic. One problem with this measurement is that if you measured elasticity when price fell from 60p to 40p the answer would be different:

The reason for this variation is that the percentage change in each case is being measured from a different base. When price rises from 20p to 40p, this is a 50 percent rise. Yet when it falls from 60p to 40p this is only a 33.3 per cent fall. The value of elasticity therefore varies. To avoid this ambiguity, elasticity is measured as the percentage change from the average value of price and quantity before and after the change, that is:
Average value
The value of elasticity for the price increase and decrease must now be identical:

The determinants of elasticity
There are a number of factors which determine how responsive quantity demanded is to price changes. First, the nature of the good and how it is viewed by consumers. A good which is a necessity will have a low value of elasticity, as an increase in price will not have a very big impact on the quantity consumed. Goods like cigarettes will have in elastic demand because they are habit forming. The tastes of consumers will be important: whether they view a television, for example, as an ecessity or a luxury will determine the value of elasticity. Another factor is whether substitutes are available for the good or not. If there is no substitute for a particular good and the house hold wishes to continue to consume it, an increase in price will have little effect on the level of demand. Other factors include the importance of the good in the household’s total expenditure. The smaller the proportion of the household’s budget which is spent on a particular good, the smaller will be the effect on demand of any change in price.
Income elasticity of demand
Income elasticity of demand is a measure of the responsiveness of quantity demanded to changes in income. It can be negative in the case of inferior goods, where an increase in income leads to a fall in the demand for a good, or positive in the case of a normal good, where an increase in income leads to an increase in demand. There is also a difference between luxuries and necessities. Luxuries will have positive income elasticities with values over 1. This means that an increase in

Cross-price elasticity = % change in quantity demanded of good X / % change in the price of good Y
Like income elasticity it can be positive or negative depending this time upon the nature of the relationship between the goods. If the goods are substitutes for one another, as the price of Y goes up, the quantity demanded of X will also rise, as consumers substitute the relatively cheaper good (e.g. margarine for butter).