What is Assembly Memory Segments?

We have already discussed the three sections of an assembly program. These sections represent various memory segments as well.

Interestingly, if you replace the section keyword with segment, you will get the same result. Try the following code –

When the above code is compiled and executed, it produces the following result –

In the light of the above discussion, we can specify various memory segments as −

The .bss section is also a static memory section that contains buffers for data to be declared later in the program. This buffer memory is 0-filled. 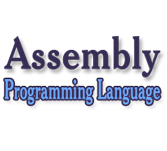