What is an Agent? - Artificial Intelligence

Agent-oriented systems have developed into one of the most vibrant and important areas of computer science. Historically, one of the primary focus areas in AI has been on building intelligent systems.

The meaning of the term ‘agent’, however, can change emphasis when an alternative perspective is applied and this can lead to confusion. People will also often tend to use the definition they are familiar with from their own background and understanding. For example, distributed computing, Internet based computing and simulation and modelling provide three further perspectives for defining what an ‘agent’ is. In the distributed computing sense, agents are autonomous software processes or threads, where the attributes of mobility and autonomy are important.

In the Internet-based agents sense, the notion of agency is an over-riding criteria i.e. the agents are acting on behalf of someone (like a travel agent does when providing help in travel arrangements on our behalf when we do not have the expertise, or the inclination, or the time to do it ourselves). In simulation and modelling, an agent based model (ABM) is a computational model whose purpose is to simulate the actions and interactions of autonomous individuals in a network or environment, there by assessing their effects on the system as a whole.

Table Various perspectives on the meaning of the term ‘Agent’. 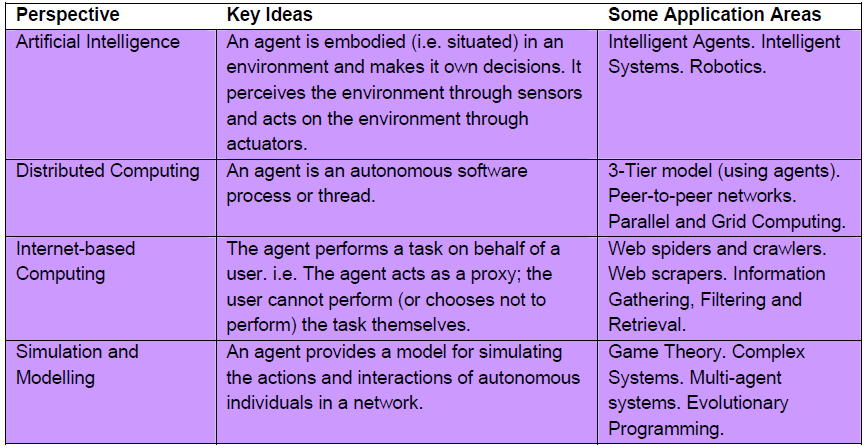 The term ‘bot’ – an abbreviation for robot – has become common as a substitute for the term ‘agent’. In academic publications, the latter is usually preferred – for example, conversational agent rather than chatbot or chatterbot – although they are synonymous. A list of bots is shown in Table below named according to the task(s) they perform. The list is based on a longer list provided in Murch and Johnson .

Table Some bots and their applications.

Confusion can also arise because people will often adopt terms from other areas, and transfer the meaning into their own areas of interest. In the process, the original meaning of the term can often become changed or confused. For example, ‘robot’ is another term like ‘agent’ where the precise meaning is difficult to pin down. The term ‘robot’ is now being confused with the term ‘bot’ – many people now consider a ‘robot’ as not necessarily a physical machine, because included in their definition are such things as Web spiders (as used for search engines), and conversational bots (such as one might encounter these days when ringing up a helpline). Even more confusion arises because, for some people, both of these could also be considered to be agents. What can also cause confusion with the use of the term agent is that it is often related to the concept of “agency”, which itself can have multiple meanings.

One meaning of the term agency is the capacity of an agent to act in a world – for humans, it is related to their ability to make their own choices which will then affect the world that they live in. This meaning is closely related to the meaning of agent that we adopt in these books. However, another meaning of agency is authorization to act on another’s behalf – for example, a travel agency is authorized to act on behalf of its customers to find the most competitive travel options.

All of these similar, but slightly different, meanings spring from the underlying concept of an ‘agent’. This is perhaps best understood by noting that an agent or agent-oriented system is analogous to a human in real life. Considering this analogy, we can make comparisons between the agent-oriented systems we design with attributes of people in real life. People make their own decisions, and exist within, interact with, and effect the environment that surrounds them. Similarly, the goal of agent designers is to endow their agent-oriented systems with similar decision-making capabilities and similar capacity for interacting and effecting their environment. In this light, the different meanings listed in the dictionary definition are related to each other by the underlying analogy of an entity that has the ability to act for itself, or on behalf of another, or with the ability to produce an effect, with some of the capabilities of a human.

The agent exists (is situated) within an environment and is able to sense, move around and affect that environment, by making its own decisions so as to affect future events. The agent is analogous to a person in real life having some of a person’s abilities.