For example, in the searching mazes problem, the search process is more than just a search for a set of paths that will allow the agent to travel to the exit or centre of the maze. In order to follow the paths, the agent must execute specific behaviours such as turning left and right, moving ahead and turning around. Hence, the search can be characterised instead as a search for the sequence of behaviours that when executed in a specific order will lead to the desired goal. Forward movement needs to be combined with sensing, for example the agent might apply a different behaviour whenever it senses a wall in front of it, or when it finds there is open space in front of it or to its side.

In the Searching Mazes model, in order to illustrate this behavioural approach to characterising the search process, the agents have been given the ability to execute three different reactive behaviours

The agents can also execute several different types of forward movement behaviour. These are controllable by two choosers in the Interface:

Screenshots of different movement behaviours for the Searching Mazes model. 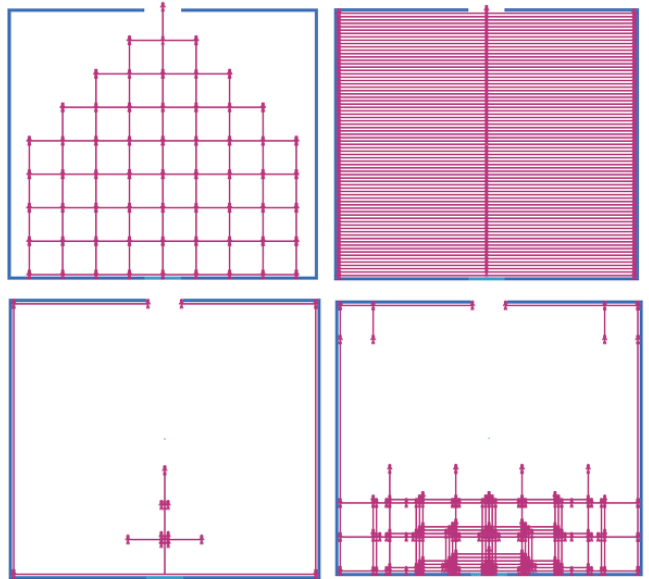 The important distinction is that the search as implemented in the Searching Mazes model is not just a search for alternative paths – it is a search for the sequence of behaviours that the agent must execute in order to get to the goal state. This distinction is most apparent in the definition of the expand-paths procedure for the model as shown in NetLogo Code where each “path” being expanded involves the execution of a specific movement behaviour – forward, left-then-forward or right-then-forward.

NetLogo Code The procedure defining how the paths are expanded for the Searching Mazes model.

The other two search problems can also be characterised as a behavioural selection process rather than a path selection process. For the Searching for Kevin Bacon model (see the expand-paths procedure defined in NetLogo Code ), the agents are applying a single behaviour – they ‘look’ around them to sense the surrounding nodes, and then they move to each in turn. In the search process implemented in the model, the behaviour being applied by the agents is the same as each node is treated as equivalent, but there is no reason why we could not vary the search by choosing between behaviours that take into account different properties of the nodes in the network, such as whether it was a super-node or not, or the distance away from adjacent nodes.

In contrast, for the Missionaries and Cannibals model, the behaviour selection process is more apparent. In the model’s expand-paths procedure shown in NetLogo Code, there are five “paths” being expanded. These correspond to the alternative actions of having two missionaries get in the row-boat, two cannibals in the rowboat, one missionary and one cannibal get in the row-boat, one missionary by itself and one cannibal by itself. According to the definition of behaviour described in Section, these actions can be considered as separate behaviours. To further emphasize the behavioural aspect of these actions, let us imagine, for example, a scenario where the missionaries exhibit the peculiar behaviour of never getting in the row-boat by themselves.

We can simulate this by simply commenting out the “expand-path searcher-agent 1 0” line in the expands-path procedure. This results in significantly different searches being performed as a result for each of the search methods, with some of the searches failing while others, such as breadth-first search, perhaps surprisingly, still managing to be successful at finding a solution, albeit different to the previous one. to expand-paths [searcher-agent]

NetLogo Code The procedure defining how the paths are expanded for the Missionaries and Cannibals model.