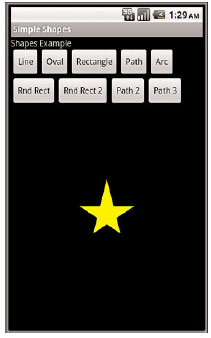 A yellow star using the stroke style of Paint. 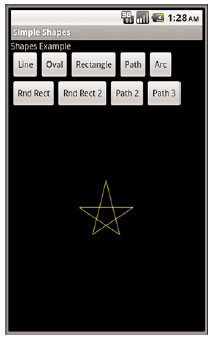 Animated GIFs store the animation frames within the image, and you simply include these GIFs like any other graphic drawable resource. For frame-by-frame animation, the developer must provide all graphics frames of the animation. However, with tweened animation, only a single graphic is needed, upon which transforms can be programmatically applied.

Frame-by-frame animation is best used for complicated graphics transformations that are not easily implemented programmatically.

In each frame, the genie remains fixed, but the gifts are repositioned slightly. The smoothness of the animation is controlled by providing an adequate number of frames and choosing the appropriate speed on which to swap them.

The following code demonstrates how to load three Bitmap resources (our three genie frames) and create an AnimationDrawable. We then set the AnimationDrawable as the background resource of an ImageView and start the animation:

To name the animation loop continuously,we can call the setOneShot() method:

To begin the animation,we call the start() method:

We can end our animation at any time using the stop() method:

Although we used an ImageView background in this example, you can use a variety of different View widgets for animations. For example, you can instead use the Image Switcher view and change the displayed Drawable resource using a timer. This sort of operation is best done on a separate thread. The resulting animation might look something like Figure—you just have to imagine it moving.

With tweened animation, you can provide a single Drawable resource—it is a Bitmap graphic, a ShapeDrawable, a TextView, or any other type of View object—and the intermediate frames of the animation are rendered by the system.Android provides tweening support for several common image transformations, including alpha, rotate, scale, and translate animations. You can apply tweened animation transformations to any View, whether it is an ImageView with a Bitmap or shape Drawable, or a layout such as a TableLayout.

You can define tweening transformations as XML resource files or programmatically. All tweened animations share some common properties, including when to start, how long to animate, and whether to return to the starting state upon completion.

The genie animation in the Android emulator. 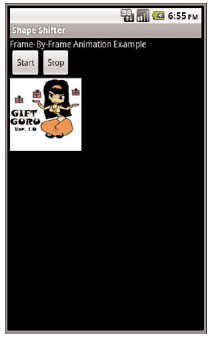 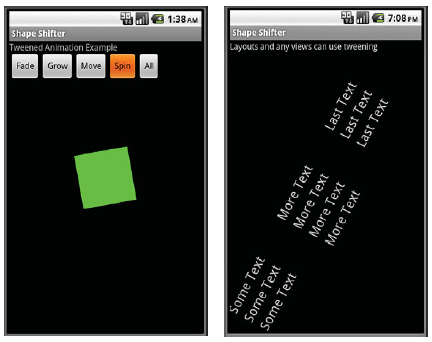 In Chapter, we showed you how to store animation sequences as specially formatted XML files within the /res/anim/ resource directory. For example, the following resource file called /res/anim/spin.xml describes a simple five-second rotation:

You can programmatically define these animations. The different types of transformations are available as classes within the android.view.animation package. For example, you can define the aforementioned rotation animation as follows:

Animation transformations can happen simultaneously or sequentially when you set the startOffset and duration properties, which control when and for how long an animation takes to complete. You can combine animations into the <set> tag (programmatically, using AnimationSet) to share properties.

For example, the following animation resource file /res/anim/grow.xml includes a set of two scale animations: First, we take 2.5 seconds to double in size, and then at 2.5 seconds, we start a second animation to shrink back to our starting size:

Loading animations is made simple by using the AnimationUtils helper class. The following code loads an animation XML resource file called /res/anim/grow.xml and applies it to an ImageView whose source resource is a green rectangle shape drawable:

We can listen for Animation events, including the animation start, end, and repeat events, by implementing an AnimationListener class, such as the MyListener class shown here:

Now let’s look at each of the four types of tweening transformations individually. These types are

Programmatically, you can create this same animation using the AlphaAnimation class within the android.view.animation package.

You can use rotation operations to spin objects clockwise or counterclockwise around a pivot point within the object’s boundaries.

Programmatically, you can create this same animation using the RotateAnimation class within the android.view.animation package.

You can scale horizontally and vertically on different scales or on the same scale (to preserve aspect ratio).You need to set four values for proper scaling: starting scale (fromXScale, fromYScale) and target scale (toXScale, toYScale).Again, you can use a pivot point to stretch your object from a specific (x,y) coordinate such as the center or another coordinate.

The following XML resource file excerpt defines a scaling animation, taking five seconds to double an object’s size, pivoting from the center of the object:

Programmatically, you can create this same animation using the ScaleAnimation class within the android.view.animation package.

To perform a translate operation, you must specify the change, or delta, in the object’s coordinates.You can set four values for translations: starting position (fromXDelta, fromYDelta) and relative target location (toXDelta, toYDelta).

The following XML resource file excerpt defines a translate animation, taking 5 seconds to move an object up (negative) by 100 on the y-axis. We also set the fillAfter 230 Chapter 9 Drawing and Working with Animation property to be true, so the object doesn’t “jump” back to its starting position when the animation finishes:

Programmatically, you can create this same animation using the TranslateAnimation class within the android.view.animation package.

The animation interpolator determines the rate at which a transformation happens in time. There are a number of different interpolators provided as part of the Android SDK framework. Some of these interpolators include 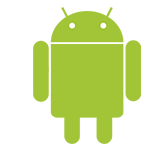