What is VSBSC Modulation? How will you find out using mathematical expressions?

In order to avoid this loss of information, a technique is chosen, which is known as Vestigial Side Band Suppressed Carrier (VSBSC) technique. The word “vestige” means “a certain part” from which, the name is derived.

VSBSC Modulation is an amplitude modulation technique, where one of the side band is removed to form a vestige modulation hence, the name vestige modulation. In other words a part of the signal is modulated along with one sideband. The frequency spectrum of VSBSC wave is shown in the following figure. 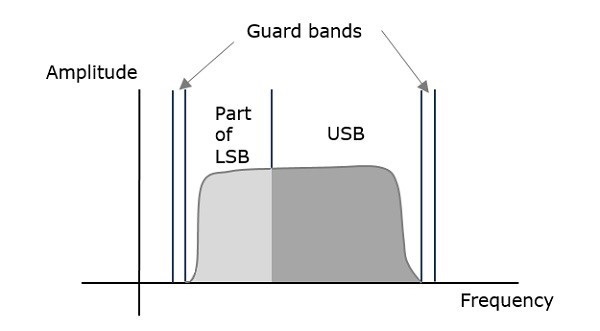 Following are the advantages of VSBSC modulation.

Following are the disadvantages of VSBSC modulation.

The most prominent and standard application of VSBSC is for the transmission of television signals. Also, this is the most convenient and efficient technique in the case of bandwidth usage.

Generation of VSBSC wave is similar to the generation of SSBSC wave. The VSBSC modulator is shown in the following figure. 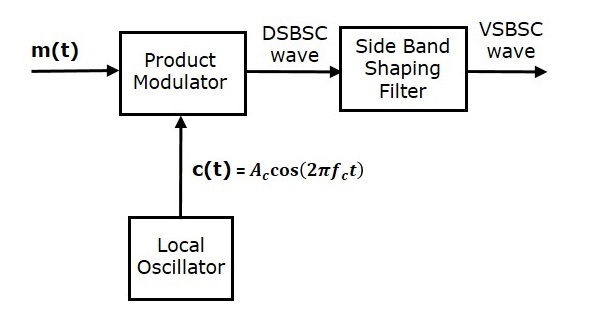 In this method, first we will generate DSBSC wave with the help of the product modulator. Then, apply this DSBSC wave as an input of sideband shaping filter. This filter produces an output, which is VSBSC wave.

Therefore, the output of the product modulator is

The above equation represents the equation of VSBSC frequency spectrum.

Demodulation of VSBSC wave is similar to the demodulation of SSBSC wave. Here, the same carrier signal (which is used for producing VSBSC wave) is used to detect the message signal. Hence, this process of detection is called as coherent or synchronous detection. The VSBSC demodulator is shown in the following figure. 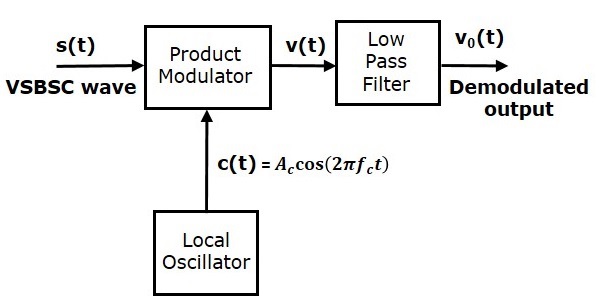 In this process, you can get the message signal from VSBSC wave by extraction when it is multiplied it with a carrier, which is having the same frequency and the carrier phase used in VSBSC modulation. The resulting signal is then passed through a Low Pass Filter. The output of this filter is the desired message signal.

From the figure, we can write the output of the product modulator as 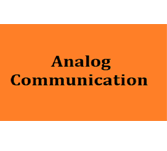