As is common in Photoshop, you have several ways to access brush controls. On the options bar at the top of the screen, when you have the Brush tool selected, you see the brush shape and size assigned to your brush. Clicking the Brushes submenu brings down the Brush Presets menu, which has some brush tip control sliders.

This simplified palette, the Brush Preset picker, works for the basic controls. 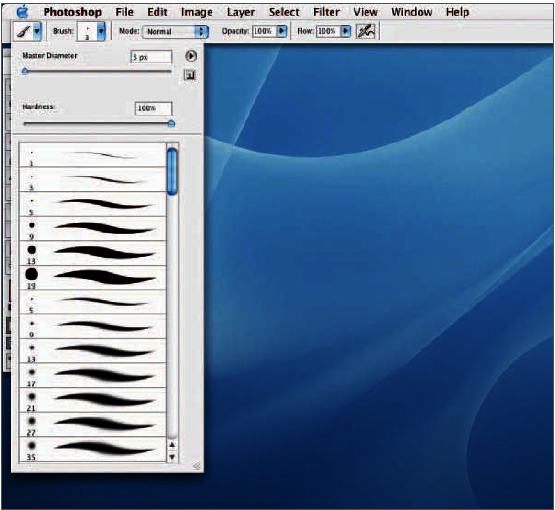 In contrast, you can open the Brushes palette by either choosing Window ; Brushes or clicking the Brushes tab in your palette well.

The Brushes palette has many wonders to behold! 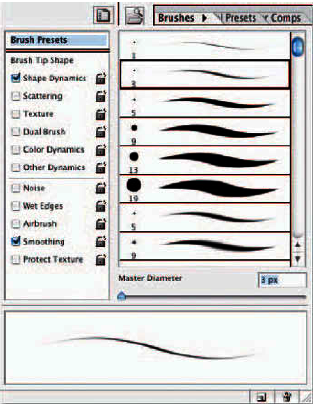 Open your Brushes palette from the palette well and drag it to your workspace so it stays open.You can see your available brush presets, heaps of brush-editing options, and a handy-dandy brush preview window. The preview window instantly reflects the attributes you assign to the brush, so you can ensure that the brush behaves the way you intend. The preview is only black and white. As you can see in , no color information is reflected.

Drag the palette from the palette well to the desktop so that it stays open during this overview. 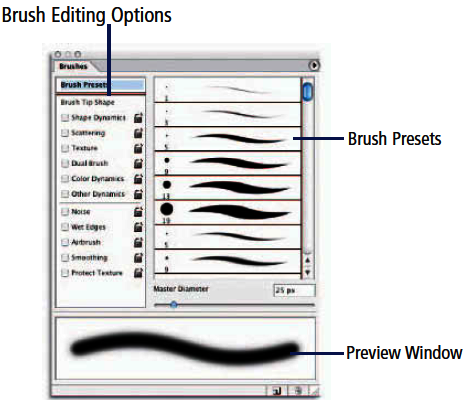 The first setting on the Brushes palette’s left frame is the Brush Presets choices. Clicking Brush Presets at the top of the left list reveals the available brushes in the scrolling list at the right side of the palette. This is the same list that is accessible in the Brushes submenu in the options bar. By default, Photoshop shows them as stroke thumbnails, which is the best way to familiarize yourself with what each brush looks like.

Choose the Scattered Maple Leaves brush. Click the brush preset and deselect all of its default settings. points out the checkboxes in the list on the left of the palette. Now you can see how the preview instantly reflects the brush changes. 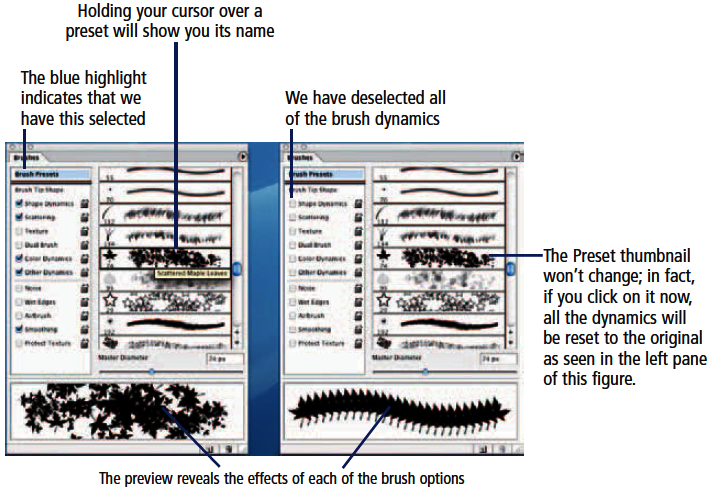 All the brush options appear below the Brush Presets choices on the left side of the Brushes palette. The first option is the brush tip shape. Do you want to be able to paint a flurry of leaves? Duplicate the look of a traditional airbrush? The shape of your brush is a major contributing factor.

Click Brush Tip Shape. You see the options for changing the fundamentals of the brush in the right frame: the diameter, angle, roundness, hardness, and spacing. The first option is the diameter. Your brush tip an have a pixel width of 1–2,500 pixels. The Use Sample Size button appears if you modify a custom brush, allowing you to revert to your originally created size.

You can adjust angle and roundness interactively or numerically. Note that if you have a symmetrical brush, you don’t see the angle change. The allowable angles are –180 to 180 degrees, comprising an entire 360 degrees. The hardness slider controls what falls off the edge of the brush tip. Falloff is the rate at which the ink decreases from the center of the brush;100 percent makes the edges very sharp and 0 percent gives the softest edge. This option is not available on custom brushes.

Spacing controls the amount of overlap that falls between the brush shapes as it is stroked across the canvas and can be anywhere between 1–1,000 percent. A spacingof 100 percent lines up the shapes edge to edge, a spacing of 200 percent leaves the brush shapes exactly one shape width apart, and a spacing of 50 percent puts each shape overlap halfway through the last one. Of course, instead of thinking numerically, you can just play around with the slider until you get the look you want.

Photoshop 7 introduces the ability to change the ratio aspect and rotation of any brush, including custom brushes. You didn’t change the spacing, but the change in the roundness gives the effect of more space between each leaf. 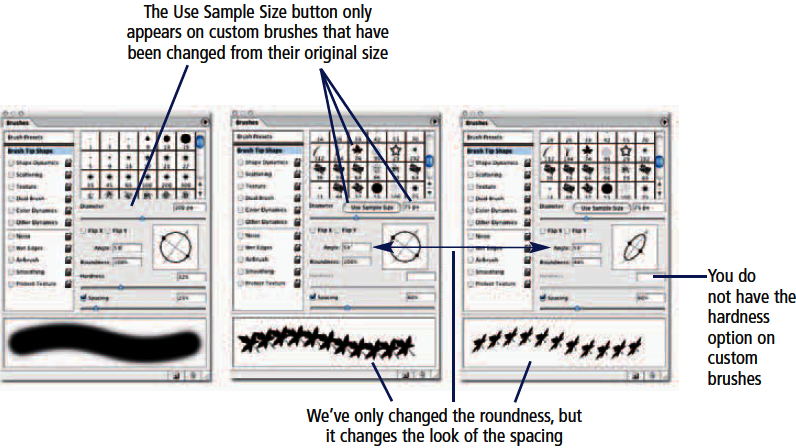 With just these settings, you can create a variety of brushes. Changes in one setting may give the illusion of a different adjustment.

shows a comparative example of different settings. Changes in diameter(measured in pixels [px]), horizontal mirroring (Flip X), vertical mirroring (flip Y), angle, roundness, hardness, and spacing can give quite a variety of looks. The Comment column allows you to quickly see the relationship of one brush stroke to another;brush stroke 2 is the same as brush stroke 1 but with a spacing difference, for example. Take a look at the brush strokes in Figure and compare the settings depicted in .

Brush strokes2 and 3only differ in their hardness, but it looks like the spacing has increased in 3. It’s because the edge of the brush is fading to transparent

The Shape Dynamics setting enables you to specify randomness and variation in a stroke. Some of its options are only available if you are using a pressure-sensitive digital tablet.What?! You say you don’t have a tablet? Using Photoshop without a tablet is sort of like going snorkeling without a mask. As long as you have the snorkel, you technically are snorkeling, and yeah, you can see…sort of…mostly…but you really miss out on a lot. So get a tablet!Click to highlight the Shape Dynamics option on the left frame of the Brushes palette. You can see your options for the shape dynamics on the right.

Angle Jitter lets you control or randomize the brush tip angle, which is great in a couple instances: 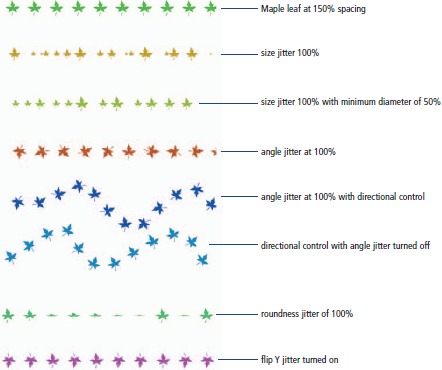 Click Scattering on the left frame of the Brushes palette to see the options available on the right side. Scattering distributes the amount and position of brush marks on a stroke. The higher the scatter percentage, the farther the brush mark may be from the line of the stroke. Selecting Both Axis scatters the marks radially, while deselecting the option scatters only on the perpendicular of the stroke.

Count specifies the number of brush marks at each spacing point, and Jitter randomly varies that number along the stroke by the percentage you set. Setting the count and variation to 0 percent uses your brush tip shape settings. Setting jitter to 100 percent gives the maximum randomness. Texture can add an interesting effect. 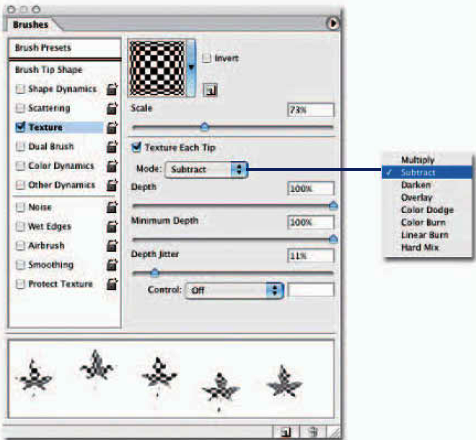 Dual Brush uses a second brush tip, blended in, in a single stroke. This is great once you’re familiar with all the brushes. You can even specify and control the mode with which the second brush is applied to the first brush. To display these settings, click the Dual Brush option on the left side of the palette. You can see the option . The settings appear on the right side of the palette.(You do see the trend here, don’t you?)

The second brush gives your Scattered Maple Leaves brush a stamped quality. It breaks up the clean edges and gives it a more organic feel. 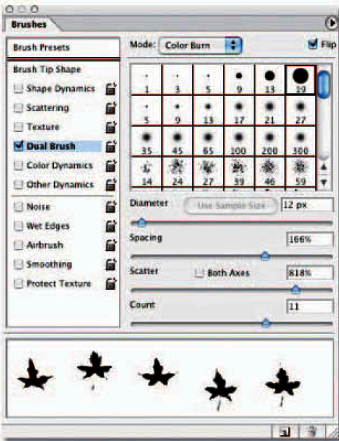 Color Dynamics and Other Dynamics

The last set of options are the Color Dynamics and Other Dynamics. By now you will have figured out that you need to click the left side to see the options on the right side.

Color Dynamics allows color variation in a stroke, which gives a natural, organic feel. Foreground/Background Jitter determines how paint varies between the two colors. To the left(0 percent)is all foreground color, but to the right(100 percent)is not all background color:It is a full mix. Think of it as a 0-percent mix and a 100-percent mix.

The Hue, Saturation, and Brightness Jitter choices introduce variation to their respective aspects. The higher the percentage, the more the variations deviate from a numerical setting. The best way to understand this is to think of painting in HSB(hue, saturation, and brightness).

Since nothing in nature is a solid color, playing with these settings at a more subtle level gives some very organic results 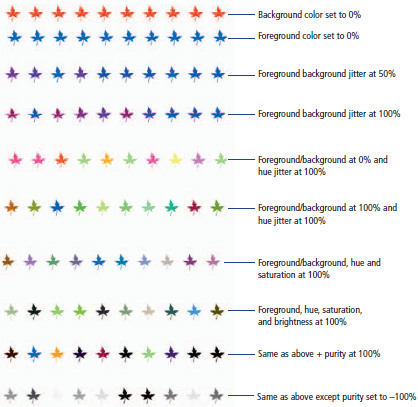 Randomness in the opacity and flow gives a feeling of more depth. 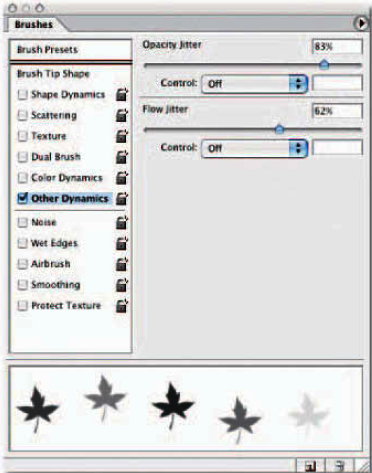 These brush tip characteristics are toggles; they are on or off. Clicking these options on the palette’s left frame does not bring anything up on the right frame; notice the line that separates these characteristics from the earlier options.

Putting the Brushes Palette to Use

You put most of the Brushes palette options into effect, but here’s an example of how the brush controls have made life so much easier. The graphic of leaves in swooping in on the wind was made with little more than one sweep of a brush. All the settings are shown in through 20, so you can emulate them—in case you don’t believe me!

This figure was created with a few dabs of a paint brush. 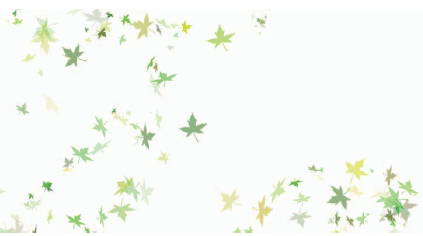 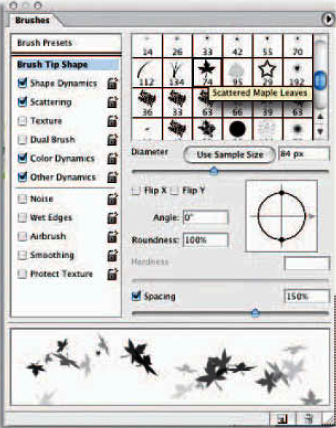 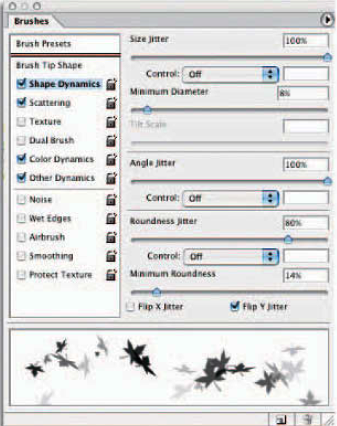 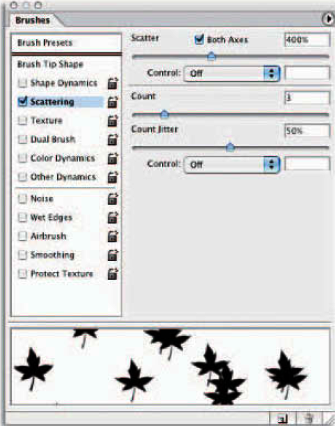 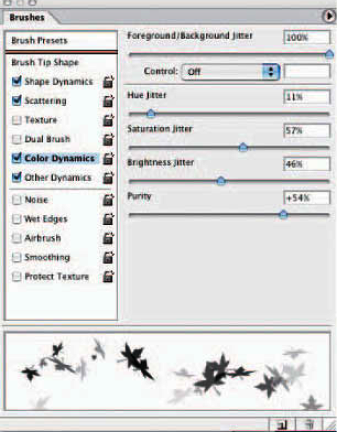 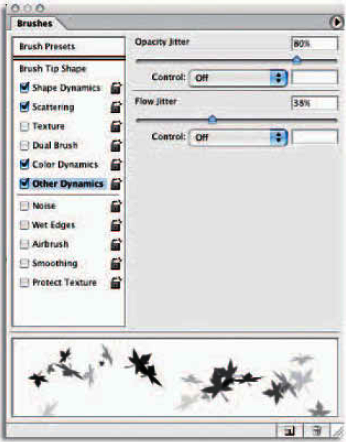 Almost overwhelming isn’t it? Well, hold on to that almost because all of the brushes can be applied with different blending modes, which are much like layer modes. 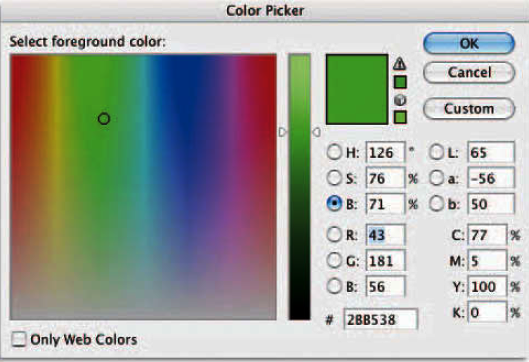 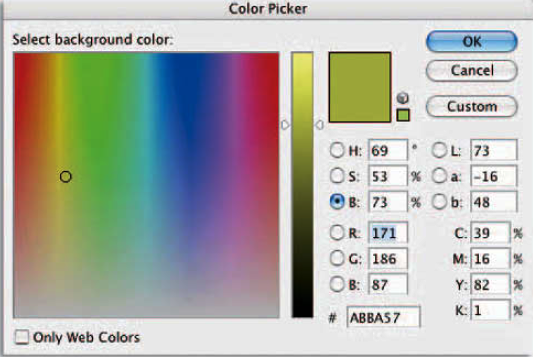 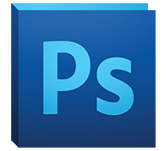