Cash budget is nothing but an estimation of cash receipts and cash payments for specified period. It is prepared by the head of the accounts department i.e., chief accounts officer.

The utility of the cash budget is as follows:

Cash budget can be prepared in three different ways:

Cash receipts can be classified into various categories

Cash payments are as follows:

First step is in the preparation of a cash budget is to open the statement with the opening cash balance available.

Secondly, if any cash receipts are available that should be added one after another. In this problem, Sales can be bifurcated into two classifications, the first one is cash sales. If the cash sales is given, the amount of cash receipt due to cash sales should have to be immediately brought under the respective period i-e during the same month or week.

Third step is to list out the various items of cash expenses expected to incur during the specified period. The text of the problem deals with the delay of making the payment of expenses is one month in all cases; It means the expenses like Manufacturing overheads, selling overheads are expected to pay one month later i-e these expenses will be paid one month after. It means that the May month of other expenses are paid only in the month of June and during the month of June month expenses are met out.

The purchases requires same kind of treatment in the case of sales. Normally, the purchases are classified into two divisions viz cash purchases and credit purchases.

The cash purchases should be given effect only at the moment of cash payment is paid on the volume of purchase, but, if the credit purchases are made by the firm, the credit allowed by the vendor/supplier to make the payments should be relatively considered for the expected outflow of cash i-e payment of purchase one month later or two months later.

The expected time period occurrence of a either cash receipt or cash payment should be considered for the preparation of the cash budget.

From the estimates of income and expenditure, prepare cash budget for the months from April to June. 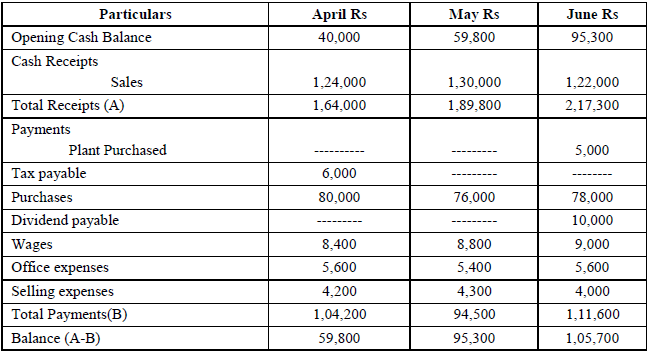 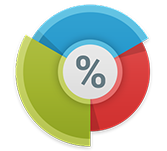