December 22, 2016, Ministry of Labour and Employment has released ESIC notification regarding the increase in salary limit INR 15,000 to INR 21,000 with effective from 1 January 2017. 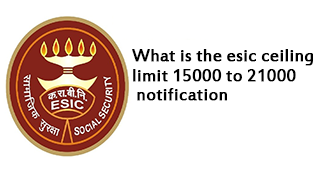 The wage ceiling limit first raised in May 2010 it was increased from INR 10,000 to INR 15,000. Now with the current increase, INR 21,000 has brought the ESIC Act in line with the Payments of bonus act. The government of India desires to include more employee in the ESI scheme.

According to the ESIC 21,000 notification, the Eligibility for the ESI the employee salary must be above 21,000 RS. ESI deductions calculated on the gross salary earned by the employee (Gross salary is the total salary before deductions).

ESI scheme contribution periods with each of six months duration.

First is from 1 April to 30 September

Second is from 1 October to 31 March

The salary limit is increased from 15,000 RS to 21,000 RS WET from 1 January 2017. The government has specified ESI percentage at which both employee and employer need to pay to the ESIC (employee state Insurance Corporation). ESI payment has to be made within 15 days of timeframe from the last day of the calendar. The percentage of contribution by the employer is 4.75% with respect to the employee wage. The employees' contribution is 1.75% Employees salary, Employees earning Rs.15, 000/- gross per monthare not covered under ESIC act. The employer needs 20 eligible employees registered in ESIC.

Official ESIC 21,000 notification PDF is available in the official site of ESIC it contains amendments of ESIC act 1948 and 2010 and 2016. The current amendment is effective from the beginningof the year 2017.