What is the difference between agreement and contract? 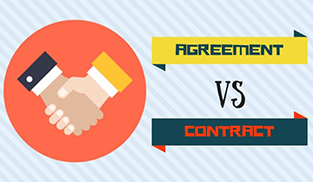 When a party accepts the proposal by the other party agreement, come into force. The same agreement enforceable by-laws keeping both parties legally binding is known as the contract. Elements of the agreement are first coming to the offer and later the acceptance, in case of contract first the agreement and later the legal framework takes place.

According to the sec 10 of Indian contract Act, all agreements are made by the free will of both parties and lawful agreement of that free consent is known as a contract. This section is in the central government know as Indian contract Act 1872. In this section, if the contract is made against the will of one party the contract becomes void and nothing in law interferes with the other party decision and contract is repealed.

Definition agreement in business terms is when a promisor party offers a deal to another party if the concerned party agree to terms and conditions of the promisor both comes into an agreement in agreements both parties are responsible to each other law does not partake in this procedure.

Definition of the contract when both the parties come into an agreement which is legally enforceable by law certain element are included while confirming a contract and they are offering acceptance and free consent and the intention of legal obligations.

Some contracts used are a void contract and valid contract, the bilateral contract, quasi-contract.

In conclusion, if contract s to be taken down legal measures are used if any party shows incapacity of fulfilling the contract then the legal actions are taken. Where agreement depends on the commitment of both parties.

0 Comments on What is the difference between agreement and contract?