The payment of bonus act 2016 passed by the Government of India concerning enhancement of eligibility for calculation of the salary ceiling. GOI intention is to bring more employee under bonus Act. Paymentsfor the bonus Act passed in 1965 for the payments of an employee working in an organization contains over 20 employees. This payment of salaries done based on the profits and productivity of the establishment. 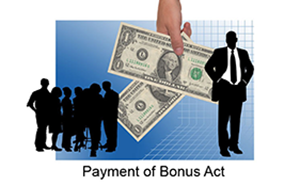 Bonus act amendment 2016 is an amending of the salary ceiling payable to the employee in recent years government of India has increased the minimum bonus of employees earlier. It was 1600 RS, the ceiling limit was 750 in 1965 as years passed in 2015 the eligibility limit is 21,000, and calculating of celling is 7000 rupees per month or the minimum wage paid to the scheduled employee as decided by the government.

The purpose of bonus amendment is the employee to partake in the bonus or the profit earned by the establishment. Earlier the acts only cover employees working under a salary of 10,000 now this limit raised to 21,000. This means the employer should pay a bonus to employees whose salary is between 10,000 to 21,000rs to get a statutory bonus. The maximum limit is increased to 20% of RS 7000and minimum bonus is 8.33%. Conditions for the establishments are employees wage should be not more than 21,000 RS per month and the company is at least five years old and at least more than 20 employees working. To pay the statutory bonus company should have made a profit in the current fiscal year. Salary under this act is calculated on basic salary plus dearness allowance. According to this act, the bonus should be paid to the employee within 8 months of companies’ a financial year.