The government of India drafted the CLRA to avert the exploitation of subcontracting work and establish better working conditions. The CLRA full form is Contract Labour Regulation and Abolition Act, 1970. 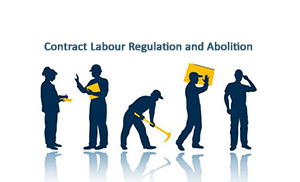 According to the CLRA Act, contract labour is employed as an entrepreneur when he/she is hired as part of the work of an organization through a contractor. The contracts labours are indirect employees.

Contract work differs from direct work in terms of the employment relationship with the establishment and salary payment method. Contract work, in general, is not admitted to the payroll and is not paid directly. The contracts are contracted, supervised and remunerated by the contractor.

The CLRA Act applies to any establishment where twenty or more workers are employed on any day of the last twelve months as paid labours. The Act applies to the principal employer of an establishment and to the employer who employs or employs 20 or more persons, including for one day in the last 12 months, as hired labour.

In order to calculate the number, the contractual work used for different purposes by different contractors must be taken into account. This Act does not apply to establishments where the work performed is intermittent or seasonal in nature. Principal employer and the contractor must apply for the establishment registration and the license, appropriately.

The contract Labour Board has also established a series of committees to deal with the issue of the prohibition of work under subcontracting in different establishments. On the basis of the recommendations of the Council, the central government has abolished the system of contract work in a series of contract labour in different industries.

0 Comments on What is CLRA?