What does mean by pay scale?

Pay scale meaning is defined as the salary structure determined by the organization system that how much salary or wage should be paid to the employee by taking different factors such as level of employee, status, rank in the company into consideration. Pay scale also varies according to the employees work period or their nature of work in various organizations like Public Sector, Government and Private sector. Grade matrix is introduced by the 6th pay commission bu giving an entry pay band of Rs 15600 to Rs 39100 basic pay along with Rs 5400-grade pay. 7th pay commission has created a new pay matrix concept and dispensed 6th pay commissions grade pay matrix. 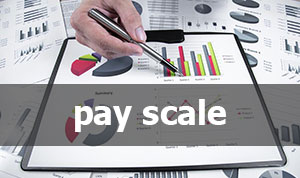 What is the scale of pay:

What is the scale of pay is explained as the basic pay plus allowances are given to the government job holders in India based on their work ranks. 7th pay commission differentiated pay scales into 18 levels. For example, the lowest basic pay for level 1 is Rs 18000 whereas the highest is Rs 250000 for level 18 such as cabinet secretary. Class 1 officers like IAS, IPS comes under level 10 with a basic pay of Rs 56000 and class IV employees come under level 1 pay scale. In addition to basic pay, state, and central government employee get benefits like DA(Dearness Allowance), HRA (House Rent Allowance), TA (Transport Allowance), telephone bills, LTA and Children Education Allowance.

Definition of Pay Structure is the total annual salary including benefits fixed during the time of hiring process and can be incremented for over a period of time and one pay structure is applicable to same ranked employees in different organizations.

Pay band is defined as the compensation range paid to an employee of certain roles like seniority. Pay bands for various levels of employees according to the 7th pay commission are given below.

0 Comments on What does mean by pay scale?