What are Minimum Wages in UP? 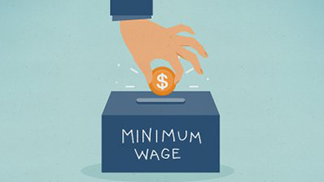 Minimum wages in Uttar Pradesh are paid on the basis of different factors employee position, skill and these wages include basic pay along with VDA ( Variable Dearness Allowance). VDA is added to the minimum wage as a countermeasure for rising inflation. Minimum wages are paid to the employees in different sectors. Employees are categorized as skilled, semi-skilled and nonskilled. This minimum wage policy assures the protection against undue pays.

UP minimum wages are introduced to balance the pay slip of many workers from rural and remote areas. UP government has issued a circular stating that there will be no change in minimum wages for the period of 1st oct 2017 to 31st March 2018 and remains same as the minimum wage of previous period 1st Apr 2017 to 30th sep 2017.

Current minimum wages uttar pradesh for the period of 1st Apr 2018 to 30th sep 2018 under general category are given below:

0 Comments on What are Minimum Wages in UP?