What are Industrial disputes act 1947 notes?

Industrial disputes Act 1947 pdf is a portable document format that is proposed by Indian Labor Law in order to settle industrial disputes. This Act contributes towards the progress of an industry by developing the cordial relationship between employees and employers. The main objective of this Act is to secure peace and harmony in the Industrial area with provision of machinery and other requirements through negotiations. The main function of this Act is to regulate the rules of strikes and lockouts, the procedure of layoff and employee retrenching in the company. 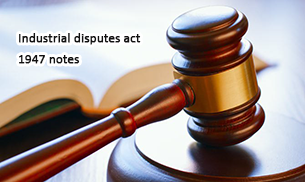 Industrial Disputes Act pdf states that, if an employee gets dismissed, discharged, retrenched from the services and if any dispute arises due to the termination process between employee and employer will be deemed as an industrial dispute. Industrial disputes have severe adverse effects on the industry like production decrement, a decrease in efficiency, costs, and discipline etc. This discontent seen in the labour force will reduce Industrial morale, and in order to avoid such problems, as a curative and preventive measure Industrial Dispute Act 1947 is passed. Hanumant notes explain about the industrial revolution that made a big impact on the cotton textile industry.

ID Act pdf states that a dismissal of a workman form his/her duties come under industrial dispute and a provision of effective machinery to the investigation and settlement process is required. Different authorities set by the Industrial Dispute Act for negotiation process are – Works committee, Conciliation Board & Officer, Labour Court, Court of Enquiry, National & Industrial Tribunals, Arbitrators, and Grievances Settlement Authority.

Industrial dispute Act notes explain how a dispute between the workers and employers is resolved. Industrial Disputes Act 1947 came into effect from 1st April of 1947 in order to protect the victimization of a workman from employers and to provide equal justice to both employer and employee.

0 Comments on What are Industrial disputes act 1947 notes?