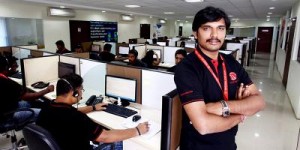 Wisdom jobs was founded almost by accident, when Ajay started a small Google group named TSNV jobs to spread the information about jobs which are available in his network. There were around 40 members in the group, but as word spread, the posts in the group were forwarded to others and there were some hires as a result. Soon this small project became a proof that there is indeed demand for a platform connecting job seekers and employers. This led him to start Wisdom Jobs in Month/year?. According to Ajay, 28 million registered jobseekers have taken the Pragnya meter test. The portal has had a growth of 200% YOY in revenue generated since they started up in 2010 to the present financial year. From four employees, it has scaled up to 300 people and will escalate to 400 by the FY 2014-15. They expect revenue to double from Rs. 22 crore from the FY 2013-14 to Rs.44 crore for the FY 2014-15.