Perspectives of Unemployment in India

Unemployment is like a headache or a high temperature — unpleasant and exhausting but not carrying in itself any explanation of its cause. 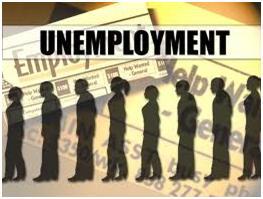 - Unemployment is a major problem in many countries, especially India. There are many reasons for this, but technological progress can be figured out as one of the main reasons. Everything is getting computerized in these modern days and this in turn leads to unemployment by decreasing the number of labors needed for a work. Unemployment is used by the government as a statistic to measure the health of the economy. Based on the rate of unemployment, like if the rate is around 6% or more, then the government will try to stimulate the economy and create jobs.The rate of unemployment is almost same in both rural and urban areas. Urban areas have more number of educated unemployed, and in the rural areas, labors and agriculturists will be unemployed for almost 6 months in every year. According to statistics, for each employed person there are six jobless looking for work and this statistics doesn’t include those who gave up and stopped looking.

Types of unemployment will include

2. What are the Causes of Unemployment? 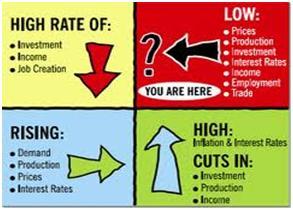 Causes of Unemployment in India:

Generally unemployment will be caused when the economy slows down and the companies will be forced to cut costs by reducing payroll expenses. Unemployment is caused by an imbalance between supply and demand of working hours. It can also be caused by competition in specific industry or company. Advanced technology can also be treated as one of the main reasons as numbers of workers are being replaced by machines. As India is the second largest in population, it also has more number of unemployed people. Some of the most important causes for unemployment in India may include:

• Increasing population of India is increasing day by day and is crossing all the boundaries. Today, India is the second largest country in population after china and it is expected that the rate of population may be doubled in the next coming decades. This is one of the major reasons that is leading to huge unemployment. Programs for family planning to restrict the population have so far not yielded desired results

• Many big corporations try to maximize their profits and reduce the costs by outsourcing people to well developed countries at cheaper workforce. The work pressure in such countries will be more and many people come back, leaving the job because of the heavy work pressure

• Even in India, many companies make workers to work for long hours or overtime instead of hiring new employees. This way they try to save money. This will lead to a state that the average salary stays the same and no new jobs will be produced.

3. What is the status of present education in India and how it leads to unemployment?

The present education system of India is not serving the purpose for which it has been started. Now a day’s education has become a profitable business that quality of education is losing with increasing amount of professional institutions with quota system and politicization, thereby mounting unemployment of graduates in the job market of the country. India is the second highly populated countries after china and obviously this has led to rush and competition in each and every field. The quest for technical and higher education has increased because scope for arts and science has been decreasing. Purpose of education is the all-round development of personality, but the current education system is neither imparting true knowledge which will help one stand on one’s own leg nor improving the talent of a student by which one can attain success in the field of their interest.

- Many private institutions and corporate institutions are coming out with high fee structure and world class facilities. Only rich and upper middle class people can afford these institutions and this is not reaching out the poor people. This is also one of the reasons for unemployment. The quest and thirst for education is running out because of the reservation system in education. Our government, around 2 years back, has passed a bill on fee re-imbursement for all the backward caste students of higher education level.

- It is being miss utilized rather being utilized as most of the students who doesn’t even know the subject properly are doing higher education just because it for free. And many of them at the end of their graduation are becoming jobless. The reservation system in education is becoming so worst that the talented people are lagging behind and people who don’t even have minimum knowledge are getting jobs.

- India has 240 universities managing over 5000 colleges of various courses and thus bringing out millions of graduates every year. Almost 50 to 60% of the graduates are still searching for jobs after their graduation, due to lack of employability, poor communication skills, less subject knowledge and entrepreneurship quality. Reports say that every year more than million people are searching for jobs in India. This is all happening because of the political rivalries and less investment in job generating manufacturing units and companies. On the other hand, everybody wants to become doctors or engineers or computer specialists in the field of IT or medicine, which is beyond the reach of many graduates and even many of them who have chosen that, are failing to succeed in that line due to poor knowledge on the subject or due to work pressure. This is also one of the reasons of unemployment.

- Since few years, it’s been observed that our education system has battered a lot. Major reason behind this is the privatization of higher education and the technical and medical institutes have just become another business venture for many promoters. They run these private educational institutions only for the sake of earning revenue. Quality of teachers and infrastructure in these private institutions is very deprived. On the other hand, cost of education is also rising spirally. Now, the higher education has become a distant dream for the middle and lower middle income group.

4. What are the Consequences of Unemployment?

Consequences of Unemployment in India: 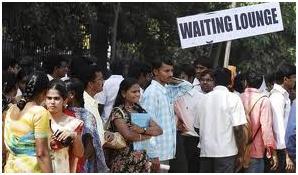 • Unemployment leads to higher rate of mental problems, stress, anxiety and depression and this can be mainly seen in men

• Because of unemployment, whole youthful generation can be lost. People, who are unemployed will not have confidence, lose self-esteem and will not have any goals. This leads them to get addicted to alcohol and drug abuse problems

• Unemployed people will experience isolated and broken neighborhoods as they cannot afford housing, house prices drop, businesses cannot stand opened without people in the area and thus shady activities will increase in the area and as a result crime will rise

• At times because of recession, employed people will have a fear of losing their job, feel survivor guilt towards those who were fired. They will be forced to work harder for lower salaries. This leads to concealed anger and hatred, stress and depression

• In cultural and social roles, more men become jobless, and it hits them much harder than women. Women do not like to marry or stay with unemployed partners as they need security for them and their future children. So, this will lead to fewer marriages and more broken relationships

5. What are the measures to be taken by government to overcome Unemployment?

Measures to be taken by government to overcome Unemployment in India:

Child labor is a crucial problem and it has to be eliminated completely because when children of underage start making money, they will look for more options to make money. Elimination of child labor can definitely help people to get better opportunities

Conducting more job fairs: Our government must initialize and generate more job fairs which will act as a bridge between companies and people who need employment, to create more employment opportunities

- Increasing government funds to public sector companies: In India there are thousands of public sector companies that are known to create more job opportunities. These are helping out in improving the employment rate. So it is the government which has to increase funds to these companies and thus imply better functioning which will eventually help people who are unemployed and thus decreasing the unemployment rate

- Increasing pay scales to reduce unemployment: Many people prefer to be unemployed instead of working for low pay scales. Increasing the pay scales for employees who are working in government and public sectors will give less chance for people to stay unemployed

- Legalizing alternative methods of earning money: There are many ways of making money that are considered as illegal, but are still done secretly. Some examples of this can include gambling and betting etc… Legalizing these kinds of methods will help in creating more employment as the government will get taxes for all the means and thus would reduce exploitation

- Creating an independent ministry of employment and better tax transitions: Implementing these steps strictly will definitely help to decrease unemployment to maximum extent

Some of the measures that have been implemented by our Indian government to overcome unemployment are:

0 Comments on Perspectives of Unemployment in India