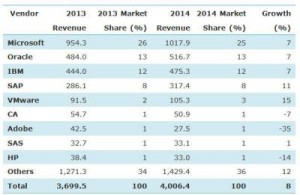 According to the latest research, India's software revenue increased from $3.7 billion in 2013 to $4 billion in 2014. The report mentioned that Microsoft is in first place in software revenue in India followed by Oracle and IBM. India has experienced the highest growth rate of 8.3% in the BRICS (Brazil, Russia, India, China and South Africa). The report stated that the major trend sin Indian software market are development of Software as a service (SaaS), open-source software (OSS) adoption and its broader market implications, changing buying behaviors and purchasing styles with the impact of digital business.