How to calculate EPF pension?

EPF pension calculator is used to calculate pension for the employee who has contributed for minimum 10 Years in EPF is entitled with a pension after attaining the age of 58 Yrs. PF Pension is the only source of regular income for many retired employees. Every private segment employee has a Provident fund pension account. It is very important for every employee to understand all about the EPF pension scheme. The EPF pension is a pension scheme for the employees of any sector who don't have any pension scheme. It is also a retirement saving scheme which gives you lump sum money after the retirement. This scheme gives a guaranteed monthly income after the retirement. The government organization Employee provident fund department administers the pension account of the entire employee. The Employee provident fund pension tries to give the social security to its employees and their families. The families of the employee also get the pension after the death of the employee. 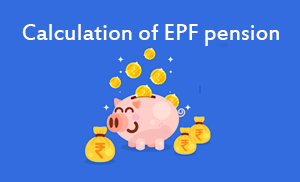 0 Comments on How to calculate EPF pension?