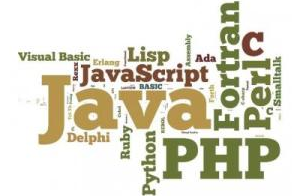 PHP: PHP is most widely used language for programming which is used by one-third of the web.PHPis also used by the big giants like WordPress, Facebook, and Yahoo.Learn PHP to apply latest cg.jobs.

Perl: Perl is a high level dynamic programming language and it was initially developed by a NASA engineer in 1987. It was known asPractical Extraction and Reporting Language.

C: It is an oldest programming language which supports structured programming, lexical variable scope and recursion. It was invented in 1978.

Objective-C: It was an add-on featured programming language with additional features to original.

C programming language. It is used to build iPhone apps.

Ruby: Ruby also old programming language like python as it is easy to read and write the code. It was designed in 1990s with the influence of Perl, Smalltalk, Eiffel, Ada, and Lisp languages.

Python: Python is easy to learn programming language introduced in 1989. It is used by YouTube and Dropbox.

CSS: It is known as Cascading Style Sheets, used to design the format and layout of a website.

R: It is a programming language and software environment for statistical computing and graphics. It is widely used by statisticians and data analysts.

0 Comments on Here's the Programming Languages that ensure Job Guarantee