A logo is not simply a trademark, a design, a slogan or an easily remembered picture. It is a studiously crafted personality profile of an individual, institution, corporation, product or service-Daniel Boorstin Logos and branding are so important. In a big part of the world, people cannot read French or English--but are great in remembering signs- Karl Lagerfeld

A logo acts as brand ambassador of a company in the corporate world. It reflects your company quality and standards and also plays a major role in presenting the company. With the changing trends in company strategies, most of the companies redesign logos to maintain their corporate identity. Here weve presented evolution of some corporate logos.

The first apple logo was a complex picture of Isaac Newton sitting under an apple tree. The logo designed by Ronal Wayne along with Wozniak and Jobs who actually founded Apple Computers depicts it as Newton.

*A Mind Forever Voyaging Through Strange Seas of Thought Alone.

*Due to the slow phase of sales, Jobs wanted to change the logo and commissioned Ron Janoff of the Regis McKenna Agency to design the new logo. The new logo was iconic with the rainbow striped apple logo and was used from 1976 to 1999. In 1998 Jobs replaced the Apple rainbow logo with a modern looking monochrome logo. 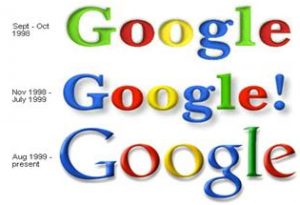 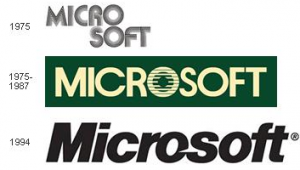 Microsoft designed its first logo in 1982 and it was changed in 1987, when the Microsoft employee Larry Osterman launched a Save the Blibbet campaign program. In 1987, Scott Baker designed the present Pac-Man Logo for Microsoft and the taglines were changed in 1994 and 1996.

Merging of the international time recording company and the computing scale company merged in 1911 and formed as Computing-Tabulating-Recording Company. CTR was changed its name as International Business Machines (IBM) in 1924. IBM started a transition of punched-card tabulating to computers, by its CEO Thomas J. Watson. In 1947, to denote the changes, IBM changed its logo for the first time in over two decades with a simple typeface logo. In 1956, Watson's son, Paul Rand changed IBM logo as a more solid, grounded and balanced appearance to continue the leadership in the corporate world. In 1972, Paul Rand changed the solid letters with horizontal stripes to convey the message speed and dynamism. If you are looking for an innovative job in IBM then prepare a cover letter and apply for jobs.

Firefox logo was designed by Steven Garrity in 2003 and it was changed due to poor branding. Afterwards the new visual identity for Firefox was identified to become a famous logo.

In 1982, John Warnock and Charles Geschke quit the Xerox Company along with forty programmers. The company was named as Adobe and provided services to create PostScript, a programming language used in desktop publishing. The first logo of adobe was designed by Warnock and Geschke and Warnock's wife Marva in the starting days. Later on some changes have taken place to shape the current logo.

Pepsi is the largest soft drinks company, founded by Caleb Bradham in 1890. Initially it was named as Brad's drink and later on changed as Pepsi-Cola. In the early years, Brad made custom logos for the brand as it became more famous. The major breakthrough of the Pepsi logo design was taken in 1940 with a crown having the Pepsi logo. The Pepsi Globe emerged when USA was in WWII, to support the country's war efforts; Pepsi had a blue, red and white logo. It became very popular and the logo continued from 1950 to 1962. The first Pepsi globe logo was designed in 1973 with a red bar coming from the left and a light blue bar coming from the right. In 1991, the typeface was completely moved from the globe. The red bar was lengthened and the typeface came on the top of the globe. In 1998, the background of the logo was changed from blue color to white color, in dropping the red horizontal band. The globe then had 3D graphic and larger than earlier designs. Present logo was designed in 2003 with a great importance to globe.

GE was established in 1892 with a merger of Edison Electric Light Company and Thomson Houston Company. The basic logo font was same from the inception and later on a circle surrounded by the company name was added to the logo due to the increased global presence and vision of the company. The present logo was designed by Wolf Olins with a blue color logo instead of the black color which had been used in all the previous logos. At the same time the company changed its tagline from We bring good things to life to Imagination at work. GE is offering solar jobs to the skilled professionals. Search jobs and apply for great career.

Nike logo was designed by Caroline Davidson in 1971. The major part of the logo was not changed with time. Initially the logo was designed with company name. Later on with the increased brand value the company name was dropped from the logo with simple and memorable appearance. At present the company shows variations in logos for its various products like Skate, Soccer etc. Follow our career tips to get selected for jobs in Nike.

Nokia was founded by Knut Fredrick Idestam in 1865 at a wood pulp mill. It was named as Nokia when the mill moved to the Nokia town. Nokia Company was a merger between Finnish Rubber Works, the Nokia Wood Mill and the Finnish Cable Works in 1967. Nokia's first logo was arrows and later it was changed to the connecting people logo, which was designed by Ove Strandberg.