"Child marriage makes it harder for families, communities and countries to escape poverty. It erodes the health and well-being of girls and the overall welfare of communities. It also undercuts international efforts to fight poverty and HIV/AIDS, improve child health and survival, and support other international development initiatives, making billions of development assistance dollars less effective"- International Centre for Research on Women

I. What is a child marriage? 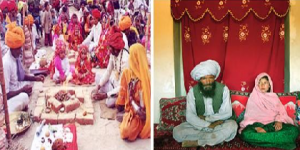 Child marriage is a marriage which occurs before 18 years of age. As per UNICEF, it is considered as a practice of human rights violation. Child marriages abolish the child interactions with the society by eliminating the opportunities for education and controlled childhood. Marriage is a formalized, binding partnership between the two concerned adults. It is still a respected and valued social system throughout the world, and may take different forms in different cultures. In many societies, especially in developing countries, child marriages are used to strengthen the relationships between families. If a mentally and physically immature girl marries before the age of 18 may leads to other health problems. At present nearly 60 million girls under the age of 18 are married to men twice their age. It is a crime as per law, if a person marries a girl below 18 years of age. Not only the person who is getting married but also the person who promotes or fails to prevent the marriage also liable to punished. Child marriage is often associated with adverse health effects because young brides have limited access to the reproductive health services and information. 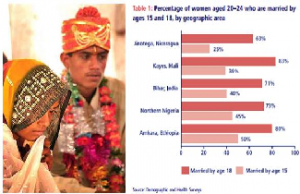 Percentage of girls marrying before the age of 18 is as below: 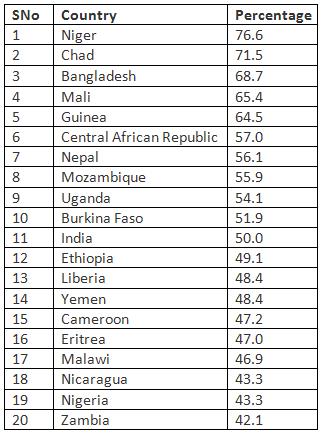 III. What are the causes of child marriages? 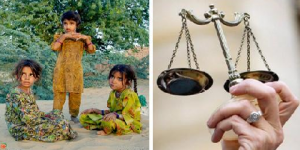 The below factors encourage child marriages in the society:

Poverty: Because of poverty many poor families sell their children to settle debts or to gain some more money to escape from poverty. Child marriages ensure that girls who marry young will not be properly educated or take part in the workforce.

Gender discrimination: Child marriages devalue women and encourage girl's discrimination.The discrimination, according to a UNICEF report on Child Marriage and the Law, often manifests itself in the form of domestic violence, marital rape, and deprivation of food, lack of access to information, education, healthcare, and general impediments to mobility.

Inadequate laws: Many of the countries like Pakistan have enforced laws against child marriage.

Trafficking: Poor families are tempted to sell their girls not just into marriage, as the transaction enables large sums of money to change hands.

Child Labour: Because of the poverty and to escape from child labour most of the poor families prefer to go for child marraiges,especially in rural areas.

The other causes of child marriages are as follows:

*In some cultures, child marriage is encouraged to increase the number of pregnancies and ensure enough children survive into adulthood to work on family land and support elderly relatives.

*Some families marry off all their daughters to reduce the cost of wedding ceremony.

IV. What are the effects of Child Marriage? 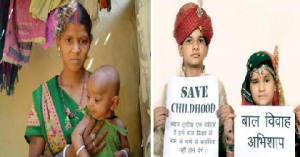 The major effects of child marriages are as below: 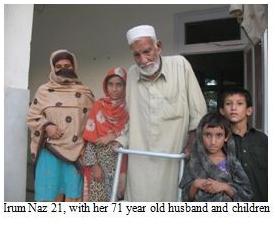 11 year old Irum Naz was married with 61 year old man and she curses her parents day and night for putting their own daughter to misery. Ultimately the victim of this story is innocent Irum Naz. In her case marriage is a lifelong punishment to her.

1.The girl's right to an education.

2.The girl's right to be protected from physical and mental violence, injury or abuse, including sexual abuse, rape and sexual exploitation.

3.The girl's right to lead healthy standards of life.

4.The girl's right to participate freely in social and cultural life.

5.The girl's right to enjoy their childhood at their parents.

6.The girl's right to protection against all forms of exploitation affecting any aspect of the child's welfare.

7.The girl's right to eventual employment.

V. How to eradicate child marriages? 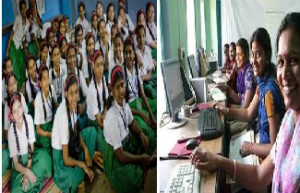 1.Child marriages can be eradicated by making some changes in the society

2.An educated child delays the age at which a woman marries

3.Education provides various employment opportunities for girls rather than marriage

4.Education also increases the socio economic status of the women in the society

7.Earning girl can be considered as a asset to the family rather than a burden

8.Promoting gender equality and the right of girls and young women to education

9.Promoting and protecting the sexual and reproductive health and rights of girls and young women, through legislation, availability of services and information and community outreach

10.Increasing the age of marriage girls is helpful.

VI. What are the initiatives of the government to control the child marriages?

Here's how some governments and non-governmental organizations have tackled the issue:

Bangladesh: The average marriage age has risen since the government launched a secondary school programme in 1994 that pays parents compensation for the loss of their daughters domestic and agricultural labour. It also covers school fees and requires parents to sign a commitment not to marry off their daughters until they reach 18.

India: The Maharashtra state government increased the marriage age from 14.5 years to 17 years by offering a life skills course. This course is designed to develop the confidence levels of girls in taking decisions about their future.

Ethiopia: Early marriage committees in Amhara and Tigray regions intervene when they hear of parents wanting to marry off girls under the legal age of 18. The committees include government officials, women's associations, religious leaders, teachers, parents and the girls themselves. The committees counsel parents and if necessary use legal action to stop marriages. In one year, 12,000 marriages were prevented.

India: The Supreme Court of India proposed a law to the wedding couple of their age with local authorities by establishing a law as the minimum age of marriage is 18 years. Uttar Pradesh state of government has launched an awareness programme on legal age of marriage, changing values and attitudes about the child marriage and eligibility of government jobs.

*Government of India should take strict initiatives to stop such child marriages. Present actions like three months prison and fine also not enough to stop the child labour practice.

*Compulsory punishment of all marriages and conducting anti child marriages in all states by appointing anti-child marriage officers can reduce the evil.

VII. What are the Myths and Facts of Child marriages?

Fact 1: It's not true. Child marriages increase the sexual abuses and also create other adverse health effects on a girl child.