A show that has mesmerized the Indian spectators over the weekends is drifting again on news broadcast; but this time not for its puns and gags although for public spats. Result: The future of the show and profession of its comic actors faces a big question mark in upcoming days. 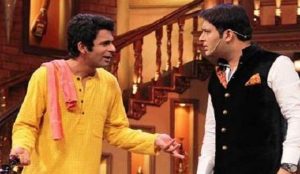 We are talking about the The Kapil Sharma Show and the destinies of both comedians Kapil Sharma and Sunil Grover with the rest are still uncertain. A public fight has brought the shows triumph to a squealing arrest. Amidst reports of Kapil Sharma mistreating Sunil Grover have surfaced, the ultimate take out for the audiences is that the team may not be together again and the show many have lost its glow after all. Look strictly and you will have many corporate lessons from this confrontation, the most important relating to team management. Here are the five takeaways for the corporate set up

Successful teams are those who put their humanitarian front up earlier to their ambitions. And this includes being nice and just to your team mates in both words and action. Touch your peers when required, meet them as regularly as possible and never-never-never raise voice on your co-workers.

Lesson No-2: Admiring in public, fighting in private

This is the primary thing to do. Everyone loves to be praised and admired in public and this goes a long way in improving morale of your associates. Sadly, team members are often seen censured by each other for failures, suspicion or assignment gone bad. This only generates trouble because after such incidents team bonhomie generally goes down for a toss.

Everyone in the team should have equal split in team affairs. Each person should have his piece of say, right and limelight in the team. While this is easy to say, but very tough to practice. Personal goals often take over from even the basic human civility, leaving the other team mates confused and throttled. In Kapil Sharma-Sunil Grover case too one person took the biggest pie of fame and the others even though being talented&nbsp; were treated like helpers.

Lesson No-4: Past is past

What has moved out in the past has come to pass. All of us have pain points that we do not want mess up with. Try not including past acts into the present discussions and ruin the present situation at hand.

Lesson No-5: Team stands first at all times, success or failure matters later

Together everyone wins and this is the only golden rule in working world. Together the entire team of The Kapil Sharma Show redefined the prime time on Indian television during weekends. Individually will they be capable to reconstruct that super success for themselves